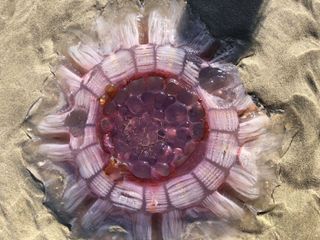 Beachgoers in New Zealand came across numerous jellyfishes on the beach. One in particular, a lion's mane jellyfish, looked more like an alien than a sea creature.
(Image: © Eve Dickinson)

A family on New Zealand's North Island were enjoying an early morning walk on Pakiri Beach last week when they came across a monstrous, gooey blob with a gelatinous grape-colored center. Although it resembled a tossed-out Jell-O mold, it wasn't for eating — the glob was an enormous lion's mane jellyfish (Cyanea capillata).

Eve Dickinson and her family had seen several jellyfish on the beach that morning, and they were pretty amazed, she told Auckland Now.

"Then we saw this massive one that seemed different from all of the others," Dickinson said. "It was incredible." [Image Gallery: Jellyfish Rule!]

Lion's mane are the largest species of jellyfish, with a bell that can grow up to 7 feet (2.1 meters) across and a thick mop of hair-like tentacles that reach nearly 120 feet (36.6 meters) long, according to Oceana, a nonprofit ocean research and conservation organization. They're much more recognizable in the water, where they gracefully drift with the currents.

These globular invertebrates spend most of their time offshore, floating around in the open ocean. But they're common in waters around New Zealand during the summer, Diana Macpherson, a marine biologist at the National Institute of Water and Atmospheric Research in New Zealand, told Auckland Now.

Similar to most other species of jellyfish, the lion's mane use their powerful stinging tentacles to stun and capture prey. The tentacles' stinging cells, called nematocysts, eject poison when they come into contact with small fish, crustaceans or other jellyfish. Fortunately, lion's mane aren't deadly to humans, although a sting from their tentacles is likely to be a bit painful.

Lion's mane jellyfish typically exhibit dark yellow or red coloration in the center of the bell, but the one the Dickinsons found stood out for its vibrant dark red-purple center.

"We spent ages looking at it because of its beautiful colors and shape," Dickinson told Auckland Now. "My boy said it reminded him of a volcano."