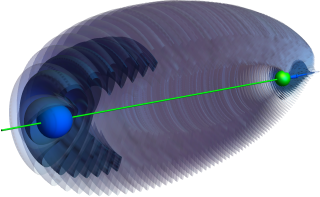 Getting upset over nothing? Well, you're not being ridiculous: Some atoms may form actual bonds with "nothing."

While a typical chemical bond requires two entities, there is one kind of atom that may be able to bond to "ghost" atoms or those that don't exist, according to a new paper published Sept. 12 in the journal Physical Review Letters.

Just as our solar system's planets orbit around the sun, electrons orbit around an atom's nucleus. The farther out their orbit is, the higher the electron's energy. But with an energy boost, electrons can often hop orbits — and some go the distance.

Rydberg atoms have one electron that jumps to a distant orbit, far away from the nucleus. "Basically, any atom in the periodic table can become a Rydberg atom," senior author Chris Greene, a distinguished professor of physics and astronomy at Purdue University, told Live Science. All that's needed is to shine a laser on an atom, giving its electrons a bit of energy. [Wacky Physics: The Coolest Little Particles in Nature]

Rydberg atoms "are unusual from a chemistry standpoint," Greene said. That's because an excited electron that has hopped very far away from the atom's nucleus can collide over and over with an electron in a nearby ground-state atom — or one where all its electrons are in the lowest energy state possible. Each time it collides, it attracts the ground-state atom bit by bit, eventually trapping it in what is called trilobite bond.

"This very tiny interaction with a distant atom," can interact with the Rydberg atom such that the resulting molecule looks like a fossil of the extinct arthropods called trilobites, Greene said.

Trilobite molecules were first predicted to exist in 2000 and experimentally observed 15 years later. But now, Greene and his team predict that there is a way to "trick" the Rydberg atom into forming a bond with, well, nothing.

All they needed to do was do a bit of sculpting.

In a purely theoretical experiment, the team used a computer algorithm to figure out a sequence of electric and magnetic pulses they could apply to a Rydberg hydrogen atom, shaping it in such a way as to form the trilobite bond.

During each electric pulse, the electron orbital of the Rydberg hydrogen atom can be stretched; and during each magnetic pulse, it can be twisted a tiny amount, Greene said.

"Somewhat surprisingly, in the intermediate stages before the final pulse is applied to the atom, the state of the bonding electron does not look very much at all like the trilobite," Greene said. "It only comes into sharp focus as the desired state at the end of the final pulse."

Their calculations showed that, like a spider shooting its web into empty space, it is possible for a Rydberg atom to form a trilobite bond with a "ghost" atom.

"The [theoretical] electron is behaving just exactly as though it were bonded to an atom, but there is no atom to bind to," Greene said. And it is doing so in a very directional way, meaning that it is pointing to a nearly exact spot in space where it would have bonded to a ground-state atom. This bond to nothing, they found, should stay for at least 200 microseconds.

"We are pretty confident," that this would hold true if they tried it experimentally, Greene said. But for it to hold true experimentally, researchers will need to figure out how to synchronize pulses and block external fields, which could be large hurdles to clear, according to the American Physical Society.

Greene hopes to figure out if there are other ways to "trick" electrons into making bonds with nothing, such as by applying microwaves or fast laser pulses. He suspects that these atoms, bonded to absolutely nothing, could behave differently if prompted to undergo chemical reactions.