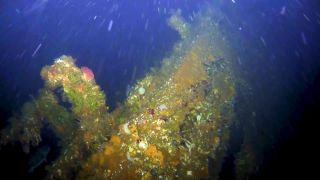 Wreckage from the USS Abner Read, which was cleaved by a Japanese landmine explosion in August, 1943. Scientists have rediscovered the boat's missing stern.
(Image: © Scripps Institution of Oceanography at UCSan Diego)

A World War II shipwreck that was lost for 75 years has been discovered in the waters off the Aleutian Islands in Alaska.

Sonar and video revealed the stern of the USS Abner Read, which was torn off the destroyer on Aug. 18, 1943, about 290 feet (88 meters) below the surface of the Bering Sea, near the island of Kiska, Alaska.

"There was no doubt," expedition leader Eric Terrill, an oceanographer at Scripps Institution of Oceanography and co-founder of Project Recover, a joint public-private partnership that was part of the search effort, said in a statement. "We could clearly see the broken stern, the gun and rudder control, all consistent with the historical documents." [20 Most Mysterious Shipwrecks Ever]

The USS Abner Read was patrolling the waters off Kiska, Alaska — which along with the island of Attu was one of only two scraps of U.S. territory to have been occupied by the Japanese during the war — around 1:50 a.m. local time when an enormous explosion, probably from a Japanese mine, blasted the destroyer. Though the Abner Read's stern was cleaved, the ship's crew managed to keep water from reaching the main area of the ship, and two Navy ships hauled the destroyer back to safety.

"This was catastrophic damage that by all rights should have sunk the entire ship," Sam Cox, curator of the Navy and director of the Naval History and Heritage Command, said in the statement.

However, the ship was fixed and went on to wage several more battles against the Japanese in the Pacific, before ultimately being sunk in November 1944.

However, the ship's stern was never recovered.

To find it, a team of scientists from the Scripps Institution of Oceanography at the University of California San Diego and the University of Delaware began combing the ocean floor using multi-beam sonar. When they found a likely target, they sent down a remotely-operated submarine to capture video of the object. The video confirmed that the stern belonged to the USS Abner Read.

Shipwrecks like the Abner Read are protected from divers who may damage or disturb the site under the Sunken Military Craft Act of 2004.

Editor's Note: This story was updated to correct the headline. The USS Abner Read was not a battleship, it was a destroyer, as described in the article.