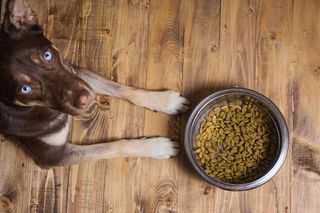 Gluten-free diets are going to the dogs: So-called "grain-free" dog foods have become popular these days, but the diets may not be good for some pooches' hearts.

Recently, the U.S. Food and Drug Administration (FDA) announced that it is investigating a link between grain-free dog foods — which have ingredients such as sweet potatoes, peas and lentils — and canine heart disease.

Grain-free dog foods are marketed as being closer to dogs' "ancestral" diets, according to The New York Times. But some veterinarians have reported a link between these foods and a type of canine heart disease called dilated cardiomyopathy (DCM), in which the heart becomes enlarged and doesn't pump blood properly. [These 7 Foods Cause the Most Pet Deaths]

Large dog breeds, such as Great Danes, Saint Bernards and Doberman pinschers, appear to have a genetic predisposition for dilated cardiomyopathy, the FDA said. But recently, veterinary cardiologists have reported seeing the disease in other breeds, including golden and labrador Retrievers, Shih Tzus and miniature schnauzers, the FDA said. In these cases, the dogs ate grain-free dog food for months to years.

"These reports [of canine heart disease] are highly unusual as they are occurring in breeds not typically genetically prone to the disease," Dr. Martine Hartogensis, deputy director of the FDA's Center for Veterinary Medicine's Office of Surveillance and Compliance, said in a statement.

Scientists are still investigating this link, as well as the question of why grain-free dog foods may be problematic in some cases.

In the meantime, the FDA recommends that changes in a dogs' diet be made in consultation with a licensed veterinarian. In addition, pet owners and vets who suspect that a dog's heart disease is tied to grain-free dog food are encouraged to report the case to FDA's electronic Safety Reporting Portal.