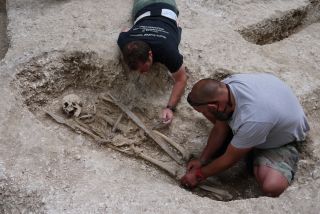 Excavators unearth the remains of the sixth-century Saxon soldier who was found buried with a spear, knife and sword.
(Image: © Wessex Archaeology)

A U.S. veteran discovered the grave of an ancient warrior — a sixth-century Saxon soldier buried with a sword, spear and knife — just in the nick of time.

Why the urgency? A group of badgers threatens burials dating to not only the Bronze Age but also the sixth century at Salisbury Plain in England, not too far from Stonehenge.

So, archaeologists have teamed up with military personnel from Operation Nightingale to help unearth the ancient graves before the badgers do, said Richard Osgood, a senior archaeologist at the Defence Infrastructure Organisation (DIO) in the United Kingdom. Operation Nightingale is a military initiative that pairs researchers with service members who were recently wounded in the line of duty, particularly in Afghanistan. [In Photos: Boneyard of Iron Age Warriors]

Since Operation Nightingale began in 2011, hundreds of service members have trained with professional archaeologists, and several have now entered the field after getting their archaeology degrees, Osgood said.

As typically happens in archaeological digs, the excavators made their "spectacular discovery" just as the project was wrapping up, Osgood said. A U.S. veteran noted that a metal-detection sweep of the cemetery had shown a strange signal near some fallen trees, and an investigation of that spot revealed the ancient warrior, Osgood said.

The subsequent excavation with the firm Wessex Archaeology unearthed the warrior's skeletal remains, as well as the iron spear and knife. However, questions remain about the sword, including whether it was "pattern welded" — basically, whether it was made from different metals forged together. Researchers also wonder what type of material the Saxons used to make the sword's scabbard (or sheath), Osgood noted.

The archaeologists also plan to study the wood used to make the spear's shaft — they suspect ash, Osgood said. A later examination will confirm the individual's sex (likely a male, given its size and grave artifacts), age and height, and whether the remains reveal any visible injuries or health conditions, Osgood added.

The burial itself is located at the archaeological site of Barrow Clump, about 50 miles (80 kilometers) north of Stonehenge. Despite this distance, "the individual we recovered would almost certainly have been aware of the stone circle, even if he was not familiar with the traditions and rituals involved with the site," Osgood said.

In fact, the Saxons were known to reinterpret venerated ancient places. And this example — the sixth-century Saxon burials placed next to a Bronze Age grave mound, known as a "round barrow" — emphasizes that characteristic of the Saxons, Osgood said.

But many of these ancient graves will be disturbed or lost if the badgers have their way.

"Badgers enjoy digging through the soft soil of the graves and the Bronze Age burial mound," Osgood said. "They jumble up the remains and deposits, thus destroying the archaeological integrity and stratigraphy [different layers] on site."