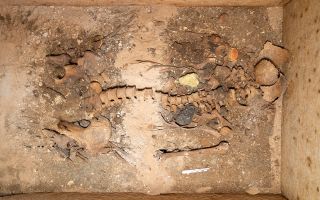 Grave robbers had about 1,800 years to steal the precious gold jewelry buried with a noblewoman on the Greek island of Sikinos. So, what allowed the noblewoman — named Νεικώ (Neko), according to a Greek inscription on her grave — to rest in peace for so long?

Grave robbers hit other ancient burials on Sikinos, which is part of the Cyclades island group. But they missed Neko's grave because it's concealed in a blind spot between two walls in the basement of a Byzantine church and a monastery, Demetrios Athanasoulis, director of the antiquities department (or ephorate) for the Cyclades, told Reuters. [Photos: Ancient Treasures Discovered in Cyprus Tomb Complex]

But Neko wasn't always buried in a monastery. When she died 1,800 years ago, she was buried next to a Roman burial monument. Her grave was filled with lavish treasures, including golden wristbands, rings, and a long, golden necklace, as well as a carved female figure, glass and metal vases and clothing, Reuters reported.

Neko was buried in a rectangular grave within a vault at the Episkopi monument, a rare memorial from the Roman period. Until now, archaeologists didn't know whom this memorial, or mausoleum, was meant to honor.

"We were unexpectedly lucky," Athanasoulis told Reuters. "This is Neko's mausoleum."

"It's very rare," he added. "A monument, one of the Aegean's most impressive, has got an identity. We now have the person for whom the building was built; we have her remains, her name."

This monument was later transformed into the Byzantine church and a monastery.

Even though Neko was buried on Sikinos, southeast of Athens, it's not clear if Neko lived there during her lifetime.

"We are now trying to find out more about her," Athanasoulis said. "We are still at the beginning."