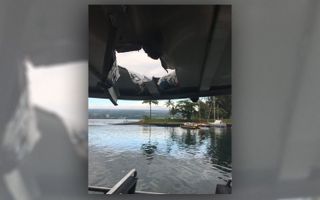 A lava bomb ripped a hole in the metal roof of this tour boat.
(Image: © Hawaii Department of Land and Natural Resources )

A burning chunk of lava plummeted down and punctured the roof of an offshore Hawaiian tour boat yesterday (July 16), injuring 23 people who likely weren't expecting to get up close and personal with a lava bomb.

The so-called bomb — named because of the rounded, aerodynamic, bomb-like shape the lava takes as it hurtles through the air — punctured the metal roof of a Lava Ocean Tours vessel shortly after 6 a.m. local time, the Hawaii Department of Land and Natural Resources (DLNR) reported.

Four people were rushed to Hilo Medical Center by ambulance, nine others went to the hospital in private vehicles and an additional 10 were treated at the scene for minor injuries and burns, according to the Hawaii County Fire Department. A 20-year-old woman sustained the most serious wound: a fractured femur. [Photos: Fiery Lava from Kilauea Volcano Erupts on Hawaii's Big Island]

After the basketball-size lava bomb struck the boat, the vessel returned to Wailoa Small Boat Harbor, in Hilo, where emergency responders and officers met it. The Hawaii Division of Conservation and Resources Enforcement and the U.S. Coast Guard are now investigating the incident.

One of the people on the boat recorded the event, showing the dark, billowing smoke envelop the vessel as the red-hot lava burns in the distance. Then, suddenly, a loud thwack is followed by screams of his fellow passengers, according to his Facebook video.

"Clearly everyone is interested to learn what happened this morning," Suzanne Case, Hawaii DLNR chairwoman, said in a statement. "In the meantime, all of those injured today are very much in our thoughts for speedy and full recoveries."

The owner of the tour boat has a current and valid permit to operate commercial ocean tours at Kapoho, a now-uninhabited area of the Big Island's Puna district, where the lava is erupting, the DLNR said.

Lava has been erupting on the Big Island since early May, when geologists noticed unusual activity at Kilauea volcano. The eruption has led to rarely seen events on the Big island — including blue flames from burning methane, glass strands called Pele's hair and hundreds upon hundreds of earthquakes.

More recently, lava from this eruption led to the formation of a small island, the U.S. Geological Survey reported July 13. The island is tiny — less than 30 feet (9 meters) in diameter — but it's a reminder that volcanoes built Hawaii in the past and that they're not stopping anytime soon.