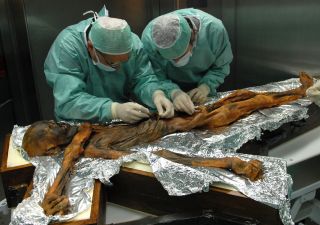 A mere 2 hours before his grisly murder about 5,300 years ago, Ötzi the iceman chowed down on some mouthwatering morsels: wild meat from ibex and red deer, cereals from einkorn wheat and — oddly enough — poisonous fern, a new study finds.

It's unclear why Ötzi ate the toxic fern, known as bracken (Pteridium aquilinum). But it's possible that he used the fern to wrap his food, almost like a piece of plastic wrap, and then unintentionally ingested some of the toxic spores the fern left behind, said study co-senior researcher Albert Zink, head of the Eurac Research Institute for Mummy Studies in Bolzano, Italy.

Or perhaps Ötzi ate the fern as a type of medicine to treat his intestinal parasites, Zink said. [Album: A New Face for Ötzi the Iceman Mummy]

"It looked like he consumed it [the bracken] quite regularly, which would make it more like a kind of drug he took against the parasites," Zink told Live Science.

This discovery comes from the first in-depth study of the iceman mummy's stomach. German hikers found the frozen remains while hiking in the Italian Alps in 1991. Since then, researchers have gleaned details about Ötzi's life by studying his remains and belongings — including that Ötzi had 61 tattoos, arthritis, bad teeth and a possible case of Lyme disease. Researchers even found that Ötzi had sharpened his tools days before his murder.

However, the iceman's diet had remained somewhat elusive. Previous analyses looked only at Ötzi's large and small intestines, because, until a recent computed tomography (CT) scan, scientists had absolutely no idea where Ötzi's stomach was located.

The new scan revealed that the iceman's stomach had moved up during the mummification process. So, scientists got right to work, analyzing the stomach's contents so they could figure out what Ötzi gulped down before his demise.

One thing was certain: Ötzi's diet was heavy in fat, but this wasn't from cheese, as researchers previously guessed, said Zink and study co-senior researcher Frank Maixner, a microbiologist at the Eurac Research Institute for Mummy Studies. Rather, the fat came from an animal Ötzi had recently consumed, likely the ibex (Capra ibex), Zink said.

This finding made sense, as earlier research revealed that Ötzi had lactose intolerance and thus had trouble eating dairy products, Zink added. The iceman likely needed the calories from this fatty meal to help him scale the Alps, where he lived, the researchers said.

"The high and cold environment is particularly challenging for the human physiology and requires optimal nutrient supply to avoid rapid starvation and energy loss," Zink said in a statement. "The iceman seemed to have been fully aware that fat represents an excellent energy source."

However, there's no way to know whether the meat Ötzi ate was fresh or dried, the researchers noted. The iceman likely ate the meal between 30 minutes and 2 hours before an ambush attack killed him, Zink added.

The team plans to study Ötzi's microbiome next. Given that the iceman didn't eat processed foods, "we'll try to reconstruct it as much as possible and compare it to [that of] modern people" to see how the bacteria that live within humans have changed over thousands of years, Zink said.

The study was published online today (July 12) in the journal Current Biology.