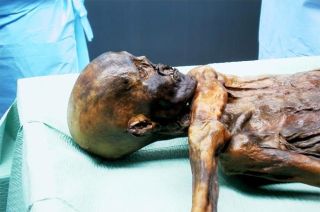 Ötzi the Iceman was discovered in 1991 by hikers in the Alps.
(Image: © Franco Rollo, University of Camerino.)

The murder of Ötzi the Iceman was likely committed at the end of a harsh personal conflict, researchers at a three-day mummy congress in Bolzano, north Italy, concluded.

Launched to celebrate the 25th anniversary of the Iceman's discovery in the Ötztal Alps in South Tyrol, the meeting presented new insights on the 5,300-year-old mummy, including a profile carried out with latest criminological methods.

According to this analysis, Ötzi did not flee up the mountain to escape his enemies. On the contrary, he was just resting and taken by surprise by his attacker(s) who shot the arrow from behind and at a distance.

The theory is the latest of a series of speculations over Ötzi's death. No corpse has been more thoroughly investigated.

"In terms of his significance for science, Ötzi is not simply an isolated mummy discovery. He could be seen as a typical European from earlier times and is precious for this reason alone," Albert Zink, director at the EURAC Institute for Mummies and the Iceman in Bolzano, said.

Scientists have learned a lot about Ötzi in the past 25 years. Among many things, they discovered that he had brown eyes, was about 5 foot, 3 inches tall and weighed 110 pounds.

He died at around 45, was arthritic, lactose intolerant, suffered from atherosclerosis and had cavities, worn teeth and periodontal diseases. He was also infected with Helicobacter pylori, the pathogen that gives people gastritis and stomach ulcers. Genetic tests revealed he belonged to the European haplogroup K and was probably infertile.

"What concerns us most these days is to know who the Iceman was, what role he played in society and what happened to him in the last days of his life," said Angelika Fleckinger, director of the South Tyrol Museum of Archaeology where the mummy is housed in refrigerated cell with an observation window.

Horn began his inquire by examining the crime scene as it appeared on Sept. 19, 1991 when a human corpse was found near a melting glacier in the Ötztal Alps.

The corpse was lying with the chest against a flat rock. Only the back of the head, the bare shoulders and part of the back emerged from the ice and meltwater.

He reconstructed the crime scene with the objects that were found in the vicinity and added to his analysis the data from the forensic medical examinations.

"I actually had more information with Ötzi than in certain modern crime cases," Horn said.

The results of his investigation were that Ötzi did not feel threatened shortly before his murder.

"He wasn't escaping, but resting. He had placed down his gear and enjoyed a hearty meal," Horn said.

Indeed, previous research established that Otzi had eaten Alpine ibex — a wild goat — just 30 minutes to 2 hours before his death.

"When you run away, you do not just sit and stop to eat a big meal," Horn told Discovery News.

He noted however that a few days prior to the murder, the Iceman had incurred an injury to his right hand.

"The wound was the result of a defensive action during the course of a physical altercation. Since no other injuries could be found, we believe he came out as a winner from that hostile encounter," Horn said.

Such conflict could explain the surprise attack a few days later. Anger might have mounted after the unsuccessful hand-to-hand fight in Ötzi's counterpart and a new attack was planned — by surprise this time.

According to Horn, the arrow shot appears to have been launched from a great distance in an act of treachery, taking Ötzi by surprise.

All his objects, including the valuable copper axe, remained at the crime scene —a fact that made Horn rule out theft as the reason of the killing.

"A personal conflict is more likely. We are talking of a behavioral pattern that is also prevalent today in most murder cases. It starts with little things and it grows to the extreme," Horn said.