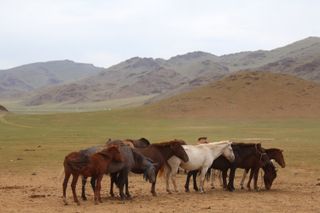 Imagine extracting a wayward tooth from a young horse more than two millennia before the discovery of laughing gas. It may sound like a Herculean task, but the ancient people of Mongolia figured it out, making them the oldest veterinary dentists on record.

Researchers made the discovery by examining 85 ancient horse remains, dating from about 1200 B.C. to 700 B.C., that had been buried in equine graves by the nomadic Deer Stone-Khirigsuur culture in Mongolia. The researchers found that one of these teeth was sticking out at an odd angle and had been cut, possibly with a stone, in about 1150 B.C., making it the oldest known evidence of horse dentistry in the world.

Later, in teeth dated to 750 B.C. and afterward, the researchers found evidence that people from the Deer Stone-Khirigsuur culture were pulling the so-called wolf tooth, a vestigial (functionless) premolar that erupts during a horse's first year of life. The wolf tooth typically falls out before the horse's third birthday, but if it doesn't, its presence can be painful for horses wearing a metal bit, the researchers said. [Beasts of Burden: Amazing Horse Photos]

Perhaps the introduction of metal bits explains why the people of the Deer Stone-Khirigsuur culture (about 1300 B.C. to 700 B.C.) began pulling out horses' wolf teeth, although the finding is correlational, so it's hard to say so for sure, said study lead researcher William Taylor, a postdoctoral research fellow of archaeology at the Max Planck Institute for the Science of Human History, in Germany.

Before the use of metal bits, people of the Deer Stone-Khirigsuur culture used organic bits — possibly made out of leather, rope, bone or wood — to guide the horses they were riding. There's no evidence that these organic bits damaged the horses' mouths, even when horses still had wolf teeth.

Once metal bits first appeared in Mongolia in about 800 B.C., the people of the Deer Stone-Khirigsuur culture likely saw the new bits' advantages, Taylor said. For instance, metal bits allowed riders to control horses with more precision, which may have helped people use horses as vehicles for warfare and long-distance travel, Taylor said.

But the metal bits would have damaged the mouths of horses with wolf teeth, and this painful chafing likely led to health and behavioral problems in the horses, he said. So, it may not be a coincidence that wolf-tooth extraction and the introduction of metal bits happened at the same time, Taylor added.

"It's really shocking and cool that that [wolf-tooth removal] directly accompanied the introduction of metal bits," Taylor told Live Science. "It speaks to not just this passive tradition of health care, but instead one that was actively responding to the new challenges of the day."

Taylor noted that the discovery was made during a collaboration with Mongolian archaeologists, some of whom grew up in the countryside as herders. These colleagues provided valuable knowledge about the "rich tradition of animal health care" in the region, which, even today, includes removing wayward wolf teeth from horses, Taylor said.

The Deer Stone-Khirigsuur culture no longer exists, but its myriad burials have helped archaeologists learn the ways of its people. These burials are accompanied by tall stones adorned with carvings of deer. Over the past 10 to 20 years, archaeologists have learned that these graves have a few to hundreds, and even thousands, of sacrificed horses buried around them, Taylor said.

"In many ways, the movements of horses and horse-mounted peoples during the first millennium B.C. reshaped the cultural and biological landscapes of Eurasia," study senior researcher Nicole Boivin, director of the Department of Archaeology at the Max Planck Institute for the Science of Human History, said in a statement. The new study suggests that veterinary dentistry "may have been a key factor that helped to stimulate the spread of people, ideas and organisms between East and West," Boivin said.

The study was published online today (July 2) in the journal Proceedings of the National Academy of Sciences.