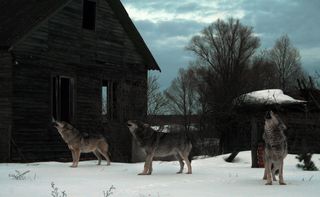 Gray wolves from the radioactive forbidden zone around the nuclear disaster site of Chernobyl are now roaming out into the rest of the world, raising the possibility they'll spread mutant genes that they may carry far and wide, a new study finds.

The wolves are prospering not due to any mutant superpower, but because the radioactive zone now acts like a wildlife preserve, researchers added.

In 1986, explosions destroyed a reactor at the Chernobyl nuclear power plant in Ukraine, releasing about 400 times more radioactive fallout than the atomic bomb dropped on Hiroshima, according to the International Atomic Energy Agency. [See Images of Chernobyl, Frozen in Time]

Afterward, it was unclear how contaminated Chernobyl's surroundings were, so the authorities declared an arbitrary 18.6-mile (30 kilometers) diameter around the reactor off-limits. People are still prohibited from living in this "exclusion zone," although it is now open to tourism.

Numerous investigations into the effects of Chernobyl's radioactive fallout on its surroundings have returned conflicting results. While some studies have found that local wildlife suffered, others have discovered evidence that wildlife has prospered, likely because the exclusion zone — devoid of people — has "become a de facto nature reserve," study lead author Michael Byrne, a wildlife ecologist at the University of Missouri at Columbia, told Live Science.

Gray wolves have especially flourished in the exclusion zone, "with their population density within the zone estimated at up to seven times greater than in surrounding reserves," Byrne said. Given this high population density, the researchers expected that some wolves born within the zone would disperse into the surrounding landscapes, "since one area can hold only so many large predators," Byrne said.

Now, for the first time, "we have tracked a young wolf that has definitely left the exclusion zone," Byrne said.

The scientists tracked 14 gray wolves in the Belarusian region of the exclusion zone — 13 adults over 2 years old and one male juvenile 1 to 2 years old — by fitting them with GPS collars. "No wolves there were glowing — they all have four legs, two eyes and one tail," Byrne said.

The researchers found that while the adult wolves stayed within the zone, the juvenile roamed far beyond its boundaries. The young wolf began to consistently move away from its home range about three months after scientists began tracking its movements. Over the course of 21 days, the animal ended up about 186 miles (300 km) outside the exclusion zone.

Due to a malfunction in the young wolf's GPS collar, the researchers couldn't determine if the animal eventually returned to the exclusion zone or remained outside permanently. Still, "it's just cool to see a wolf went that far," Byrne said.

These findings are "the first proof of a wolf dispersing beyond the exclusion zone," Byrne said. "Instead of being an ecological black hole, the Chernobyl exclusion zone might actually act as a source of wildlife to help other populations in the region. And these findings might not just apply to wolves — it's reasonable to assume similar things are happening with other animals as well."

A question these findings raise "is whether animals born in the exclusion zone are bringing mutations with them as they go out into the landscape, because with Chernobyl, the first thing people think about are mutations," Byrne said. However, "we have no evidence to support that this is happening. It is an interesting area of future research, but it is not something I would worry about."

The scientists detailed their findings online June 15 in the European Journal of Wildlife Research.