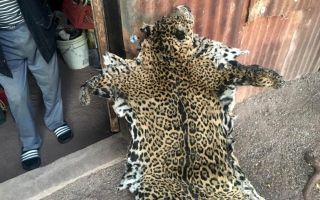 Based on the rosette patterns of this pelt, experts believe it's Yo'oko, a jaguar thought to be one of only two in the U.S.
(Image: © The Center for Biological Diversity)

One of just three jaguars known to be living in the U.S. was recently killed by poachers. Experts identified the jaguar's pelt in a recent photo and say it is Yo'oko, a male jaguar (Panthera onca) that was known to roam the Huachuca Mountains in southern Arizona, the Arizona Daily Star reported.

The rosette patterns on a jaguar's pelt are unique to each individual, a trait that allowed officials with the Arizona Game and Fish Department to identify Yo'oko's pelt in a photo sent to them from the Tucson-based Northern Jaguar Project. The endangered carnivore had been photographed near the Mexican border in Arizona several times in 2016 and 2017, according to the Center for Biological Diversity, a nonprofit organization focused on protecting endangered species.

It's unclear when Yo'oko died or who killed him, but the Arizona Daily Star reported today (June 28) that he may have been killed by a mountain lion hunter. A local rancher, Carlos Robles Elias, told the Arizona Daily Star that he heard from a friend that the jaguar was trapped and killed six months ago somewhere in Sonora, Mexico, near the U.S. border. [Photos: Elusive Jaguars Take Center Stage]

It's illegal to hunt or kill jaguars, which are an endangered species, and a jaguar may not have been what Yo'oko's killer was after. Elias told the Arizona Daily Star that he suspects a hunter was hired to trap a mountain lion, which are legal to kill in Arizona, but caught Yo'oko instead. Ranchers in the area go after mountain lions and other predators that eat calves and threaten the ranchers' livelihood, the Arizona Daily Star reported.

The Northern Jaguar Project, a nonprofit working to conserve jaguars, has declined to share the source of the pelt photo. The group doesn’t want to risk losing the trust of ranchers and farmers in the area, whose support the group depends on for conserving endangered native species like jaguars, the Arizona Daily Star reported.

Seven jaguars have been photographed in the U.S. in the past 20 years, although in the last three years, experts have spotted only three of the wild cats, according to the Center for Biological Diversity. However, jaguars once lived throughout the Southwest, from Louisiana to Southern California. Hunting and habitat loss over the past 150 years has decimated the population and jaguars have been listed as endangered by the U.S. Fish and Wildlife Service since 1972.