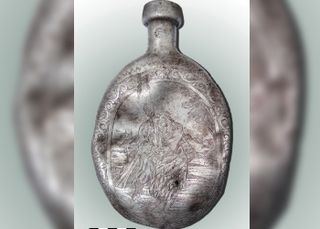 The aluminum canteen was found in a forest in Czersk, Poland, in 2006 by a local man named Piotr Szulc. During World War I, the site was used by the German Army to hold prisoners of war, mainly Russians. One of the prisoners engraved this love scene.
(Image: © Dawid Kobiałka/Copyright Antiquity Publications )

More than 100 years ago, a Russian soldier held captive in a prisoner-of-war camp engraved a beautiful scene on an aluminum canteen showing two people, deeply in love, snuggling together.

The soldier engraved the moving scene in Czersk, in modern-day Poland while World War I (also called the Great War) raged in Europe. Germany controlled much of what is now Poland and was at war with Russia.

"The front face of the Czersk canteen displays a scene of a man and a woman embracing and holding hands," Dawid Kobiałka, a postdoctoral researcher at the Institute of Archaeology and Ethnology, at the Polish Academy of Sciences, wrote in a study published online today (June 28) in the journal Antiquity. "The man has big and detailed eyes; the moustache is small but evidently cultivated. The woman is huddled close to the man." [The Great War: World War I, 1914-1918]

The man is wearing a long robe along with "a coat and a tall, furry hat, and his shoes seem to be made of leather," Kobiałka wrote. The woman is also wearing robes and "her neck is decorated with three rows of large beads. She has thick, long hair and, in contrast to her lover, she is barefoot," Kobiałka wrote. "Behind them is a landscape of arable fields, with a bushy tree growing to the right. The scene is surrounded by floral motifs and a zig-zag carving."

This "scene might be a material, and sentimental, memory depicting the owner of the artifact and his sweetheart, perhaps his fiancée or his wife," Kobiałka wrote in the study.

There is an inscription on the back of the canteen written in Cyrillic. It contains the intertwining letters "O" and "R," which may be the owner's initials, Kobiałka noted. The inscription also says (in translation) "For the memory of the European War 1914–15–16–1917" and "As a memento of being taken into captivity at Korajanowo on 15 April 1915."

There is also an image of a flying bird above the inscription, which, judging by the design of the drawing, was likely engraved by a different individual than the person who engraved the love scene on the front of the flask. "Questions thus arise: were all of the carvings completed by the same prisoner at the Czersk camp? Was the bird image added later or earlier by another soldier who was detained at the POW camp?" Kobiałka asked.

Thousands of prisoners died in captivity at Czersk. The fact that this canteen was left in the POW camp indicates that the person who engraved the love scene was among them, Kobiałka said.

Nearly 1,200 prisoners "died at the Czersk camp just in 1918 because of typhus and Spanish flu epidemics, among others," Kobiałka told Live Science.

"It is probable that the owner could [have] died in 1918. The personal belongings of prisoners who died because of infectious diseases were not reused. They were perceived as 'dangerous,' 'contagious' and, as a consequence, thrown away [and] buried in trash pits. This is the most probable interpretation [of] why such [a] beautiful object like the canteen was thrown away," Kobialka said.

The lost love scene wasn't rediscovered until 2006, when a local man named Piotr Szulc found it in the forest. The canteen is now part of an Exhibition of Nature of the Tuchola Forest and the River Wda being held in the Polish town of Czarna Woda.