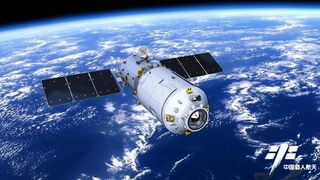 China's recently abandoned space station did a big, unexplained wobble in orbit this month. And the event left observers outside the China Manned Space Engineering Office (CMSE) guessing about the country's plans for the long-term future of Tiangong-2, the middle child of China's space station family.

Tiangong-2, the successor to the Chinese space station Tiangong-1, which slammed into Earth's atmosphere back in March, dived more than 50 miles (nearly 100 kilometers) on June 13. At the time, most observers assumed that this movement was the first step in a plan to junk the station. After the spectacle of Tiangong-1's careening, uncontrolled re-entry earlier in the year, it made sense that China might want to bring down Tiangong-2 in a more controlled manner as soon as possible. After all, China has already stopped using its small second station after the spacecraft spent just two years in orbit, and the country seems to have shifted its focus to Tianhe, a much larger and more permanent station slated to launch by 2022.

But then, after 10 days at an atmosphere-skimming altitude of 183 miles (295 km), Tiangong-2 boosted itself back into its regular orbital path 242 miles (390 km) above the Earth. Tiangong-2 is just a bit bigger than the Russian capsules used to ferry astronauts to and from the International Space Station (ISS) and much smaller than the ISS itself. [In Photos: A Look at China's Space Station That's Crashing to Earth]

China's keeping mum, as usual, about its empty station's little orbital dance, but Harvard-Smithsonian Center for Astrophysics astronomer Jonathan McDowell — who closely tracks orbital craft like Tiangong-2 — thinks he's got it figured out.

"I think part of this exercise was: Let's just do a burn that loses a fair amount of fuel to really get good measurements of what the thrust of the engine is, what the [fuel efficiency] of the engine is," McDowell told Live Science.

In other words, China appears to have transformed Tiangong-2 from a temporary space station into a test bed for the rocket technology that's already on board, going otherwise unused in the absence of a crew.

Engines are imperfect devices, and without direct testing it's difficult to know precisely how they'll perform in space. Doing a burn and then carefully measuring where the station ends up, McDowell said, is a useful test.

That China is doing this sort of testing after Tiangong-2 has otherwise reached the end of its operational life, McDowell said, "suggests the engine system you're going to use on the next space station is either identical or very similar."

Learning how the engines perform on Tiangong-2 might help China's engineers refine their plans for Tianhe.

When it launched Tiangong-2, China told the world that the station had one ton of fuel on board. Based on the various burns the station has executed since then, McDowell said he estimates that the Chinese spacecraft should still have about 1,500 lbs. (680 kilograms) on board. That's enough, he said, for the station to execute one more dive-and-climb, similar to the previous maneuvers, and still have enough fuel left for a controlled deorbit. (The station could also climb to an even higher altitude and then dive, but McDowell noted that such a maneuver might bring Tiangong-2 closer to the ISS's orbital altitude than China would want to risk.)

Regardless, he said, he wouldn't be surprised if China just deorbits the station without any further engine tests in the coming weeks or months. CMSE is likely testing some other equipment — like the temperature controls and battery — on board Tiangong-2 in ways observers can't detect, he said. But once that sort of activity is complete, he said, there's a good chance China will just chuck the empty orbiter into the ocean.