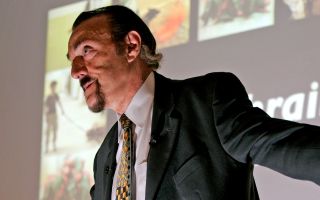 Psychology professor Philip Zimbardo, who is known for his 1971 Stanford Prison Experiment, gives his final lecture on the psychology of evil. The famous experiment placed students in a mock prison under Stanford University and assigned them to act as either guards or prisoners. New findings suggest the experiment may have been deeply flawed.
(Image: © Credit: Paul Sakuma/AP/REX/Shutterstock)

The Stanford Prison Experiment — the infamous 1971 exercise in which regular college students placed in a mock prison suddenly transformed into aggressive guards and hysterical prisoners — was deeply flawed, a new investigation reveals.

The participants in the experiment, who were male college students, didn't just organically become abusive guards, reporter Ben Blum wrote in Medium. Rather, Philip Zimbardo, who led the experiment and is now a professor emeritus of psychology at Stanford University, encouraged the guards to act "tough," according to newfound audio from the Stanford archive.

Moreover, some of the outbursts from the so-called prisoners weren't triggered by the trauma of prison, Blum found. One student prisoner, Douglas Korpi, told Blum that he faked a breakdown so that he could get out of the experiment early to study for a graduate school exam. [7 Absolutely Evil Medical Experiments]

"Anybody who is a clinician would know that I was faking," Korpi told Blum. "I'm not that good at acting. I mean, I think I do a fairly good job, but I'm more hysterical than psychotic."

In the experiment, Zimbardo paid nine student participants to act as prisoners and another nine to assume the role of prison guards. The experiment, housed in a mock jail built in the basement at Stanford, was supposed to last two weeks. But Zimbardo's girlfriend convinced him to shut it down after six days when she saw the bad conditions, Blum reported.

Since then, results from the Stanford Prison Experiment have been used to show that unique situations and social roles can bring out the worst in people. The experiment has informed psychologists and historians trying to understand how humans could act so brutally in events ranging from the Holocaust to Abu Ghraib prison (now called the Baghdad Central Prison) in Iraq. Many psychology textbooks in universities across the country also describe the experiment.

But the new discoveries could change all that.

For instance, in a series of June 12 tweets, Jay Van Bavel, an associate professor of psychology and neural science at New York University, wrote, "The bottom line is that conformity isn't natural, blind or inevitable. Zimbardo was not only deeply wrong about this — but his public comments misled millions of people into accepting this false narrative about the Stanford Prison Experiment."

Rather, scientists "have been arguing for years that conformity often emerges when leaders cultivate a sense of shared identity. This is an active, engaged process — very different from automatic and mindless conformity," Van Bavel tweeted.

Zimbardo initially denied some of the charges but agreed to talk with Blum again when Thibault Le Texier, a French academic and filmmaker, published "History of a Lie" (Histoire d’un Mensonge) in April, which took a deep dive into newly released documents from Stanford's archives. When Blum asked if he thought Le Texier's book would change the way people saw the experiment, Zimbardo said, "In a sense, I don't really care. At this point, the big problem is, I don't want to waste any more of my time. After my talk with you, I'm not going to do any interviews about it."

The hullabaloo over the experiment might have been avoided if the scientific community and media had been more skeptical back in the 1970s, other psychologists said. For instance, the results weren't published in a reputable peer-reviewed psychology journal but rather the obscure journal Naval Research Reviews. Given that respected, mainstream journals tend to have rigorous publication standards, "apparently, peer review did its job [in this case]," David Amodio, an associate professor of psychology and neural science social at New York Univeristy, wrote on Twitter.

In addition, other researchers failed to replicate Zimbardo's results, Blum reported. But the notion that people's behavior is largely dictated by their environment and social positions has lingered in the scientific and popular domains for years, possibly because the idea removes some of the blame for despicable acts from the people who commit them, he said.

"The appeal of the Stanford Prison Experiment [SPE] seems to go deeper than its scientific validity, perhaps because it tells us a story about ourselves that we desperately want to believe: that we, as individuals, cannot really be held accountable for the sometimes-reprehensible things we do," Blum wrote.

"As troubling as it might seem to accept Zimbardo's fallen vision of human nature, it is also profoundly liberating," Blum continued. "It means we're off the hook. Our actions are determined by circumstance. Our fallibility is situational. Just as the Gospel promised to absolve us of our sins if we would only believe, the SPE offered a form of redemption tailor-made for a scientific era, and we embraced it."