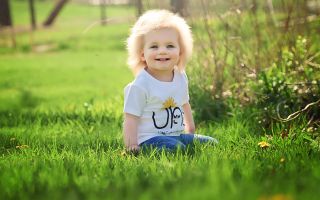 Taylor McGowan, an 18-month-old from outside Chicago, is being called a mini Einstein because her hair—like the late physicist’s—is wild and sticks up from her head.

The toddler's unruly, and absolutely adorable, hair is the result of a rare genetic condition called uncombable hair syndrome (UHS), which has been reported in only about 100 people globally, according to BuzzFeed. But some researchers think the numbers could be greater, according to the National Institutes of Health (NIH). Some people think that Einstein might have also had the syndrome, but this is just speculation for now, according to Buzzfeed.

So what is uncombable hair syndrome?

This genetic condition is also sometimes known as "spun glass hair syndrome" because people with it typically have hair that's shiny, dry and frizzy, and usually silver, blond or straw-colored. The hair also sticks up from the scalp, and it's difficult to comb, according to a 2016 study published in The American Journal of Human Genetics.

Despite the few confirmed reports of UHS, the condition is "much more common than expected," Regina Betz, a professor at the University of Bonn in Germany and senior author of the 2016 paper, told Live Science in an email. Because the condition typically gets better with age, some adults might have unknowingly had it as a child, according to the NIH. For their next paper, Betz and her team hope to calculate how common UHS is. [Genetics by the Numbers: 10 Tantalizing Tales]

According to Betz, there are no other known symptoms associated with this disorder. Some people with UHS mention problems with their teeth, Betz said, but she thinks "UHS is isolated in most cases." What causes the main symptom, namely the Einstein-hair look, isn't really known, Betz said, but "maybe [it's] because the hair [strand] is not round."

Indeed, children with this condition have hair shafts that aren't circular, but rather flat, triangular or heart-shaped as a result of genetic mutations. Usually, UHS is what scientists call "recessive," meaning a child must inherit one gene that codes for this condition from the mother and one such gene from the father in order to show symptoms of it, according to Betz. But UHS could, in some cases, also be "dominant," meaning it shows up when a gene from only one parent is inherited, according to the NIH.

In the 2016 study, Betz and her team illuminated three genes that were responsible for the recessive cases of uncombable hair syndrome: PADI3, TGM3 and TCHH. All three of these genes were found to be involved in how the hair shaft forms, so mutations in any of them can cause alterations in the shape of the hair shaft, according to the NIH.

Taylor's parents had reached out to Betz to confirm that their daughter had this rare condition because of a mutation in the PADI3 gene, according to BuzzFeed.

Though there isn't yet a treatment for the condition, Betz doesn't really think there needs to be. The family told BuzzFeed that they are now raising awareness of the importance of embracing and celebrating people's unique characteristics. They created a FaceBook page for their daughter called "BabyEinstein2.0" for anyone who wants to learn more about Taylor or her condition.