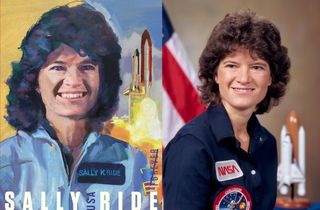 Physicist Sally Ride, the first American woman in space and the first astronaut to come out as having a same-sex partner, will be getting her own stamp.

Ride, who first launched into space on June 18, 1983 aboard the space shuttle Challenger, was herself an avid stamp collector, her partner of 27 years Tam O'Shaughnessy, said in a statement provided by the United States Postal Service.

"Sally started collecting stamps when she was a girl, and she continued to do so her whole life — especially stamps of the Olympics and space exploration," O'Shaughnessy said. "Sally would be deeply honored to have her portrait on a U.S. stamp."

Ride launched into space twice, in 1983 and 1984, both times aboard the Challenger. She was the third woman overall to reach space, after Soviet cosmonauts Valentina Tershkova in 1963 and Svetlana Savistskaya in 1982. She was the only person to participate in the investigations of both the Challenger and Columbia space shuttle disasters. Her physics career at the University of California, San Diego focused on movement of electromagnetic particles. She co-authored six children's books about science with O'Shaughnessy, and from 1999 to 2000 served as president of Live Science sister site Space.com. She died in 2012, and remains the youngest American woman to travel into space.

Long time NASA illustrator Paul Salmon painted the image used on the stamp. USPS spokesperson Mark Saunders told Live Science that he used a group photo of her first launch crew for inspiration. Ride's stamp pictures her smiling in her astronaut's jumpsuit, which reads "Sally K. Ride" in a patch on her left shoulder. Over that shoulder, the Space Shuttle Challenger lifts off into a blue sky.