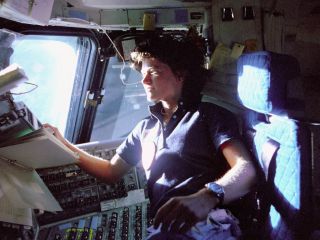 The first U.S. woman in space, Sally Ride, monitors control panels from the pilot's chair on the Flight Deck of the STS-7 mission.
(Image: © NASA)

Sally Ride, the first American woman to travel in space, has died at 61.

Ride had been fighting pancreatic cancer for 17 months and died peacefully, her company Sally Ride Science announced today (July 23). When she was 32, Ride blasted off on the STS-7 mission of the space shuttle Challenger, breaking through the highest glass ceiling for U.S. women to date.

During her historic mission, which deployed two communications satellites, Ride also became the first woman to use the shuttle's robotic arm in space.

"Michelle and I were deeply saddened to hear about the passing of Sally Ride," President Barack Obama said in a statement. "As the first American woman to travel into space, Sally was a national hero and a powerful role model." [Sally Ride: 1st American Woman in Space (Pictures)]

Ride is survived by Tam O'Shaughnessy, her partner of 27 years, who also serves as chief operating officer and executive vice president of Sally Ride Science, a science outreach company Ride founded in 2001.

"Sally lived her life to the fullest, with boundless energy, curiosity, intelligence, passion, commitment, and love," Sally Ride Science officials said in statement. "Her integrity was absolute; her spirit was immeasurable; her approach to life was fearless."

Ride was the third woman to travel to space, following Soviet cosmonauts Valentina Tereshkova in 1963 and Svetlana Savitskaya in 1982. She joined NASA in 1978 — one of 8,000 people to respond to a newspaper ad seeking space program applicants.

Only after her first spaceflight did she realize quite the impact she had had.

"It means a lot to me that my participation in that flight has meant so much to so many people," Ride told Florida Today on the 25th anniversary of her mission. "And I hadn't appreciated how much it did really mean to people, how much it touched particularly women, until after my flight. The first few months after my flight I was really struck by the way that women of all ages — from college students to 60-year-old, 70-year-old, 80-year-old women — reacted to me. It was just something that they never thought they would see."

Following her groundbreaking first spaceflight, Ride went on to fly in space once more, aboard the STS 41-G flight of Challenger in 1984. She spent a total of 343 hours in space.

Ride also played a role in two defining moments in NASA history, serving on the accident investigation boards set up in response to the tragic destruction of the space shuttles Challenger and Columbia and their crews in 1986 and 2003, respectively. In 2009, she served on the Augustine committe that helped shape NASA's new human spaceflight goals.

In 1987, Ride left NASA to work at the Stanford University Center for International Security and Arms Control, and later served as a professor of physics at the University of California, San Diego. From 1999 to 2000, she served as president of SPACE.com.

Ride was married from 1982 to 1987 to fellow astronaut Steven Hawley. She had no children; in addition to O'Shaughnessy, she is survived by her mother, Joyce; her sister, Bear; her niece, Caitlin, and her nephew, Whitney.