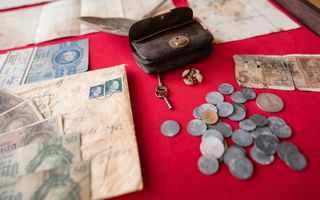 Money, documents and other personal items that belonged to Count Hans Joachim von Finckenstein were found in milk cans buried by a lake in Poland.
(Image: © Wojtek Radwanski/AFP/Getty)

A teenager unexpectedly discovered a cache of World War II artifacts — including an officer's uniform from the Wehrmacht, the unified armed forces of Nazi Germany — hidden in two milk cans buried by a lake in what is now northeastern Poland.

The cans also held a 70-year-old toothbrush, a pocket watch and a diary, according to Science in Poland.

The teen's parents promptly reported the finding to authorities, who identified the heirlooms' original owners: an aristocratic Prussian family headed by Count Hans Joachim von Finckenstein, who lived by the lake when it was a German province during World War II, according to Science in Poland. [Photos: German WWII Base Discovered on Arctic Island]

The personal articles were given to the count's daughter, Waldtraut von Finckenstein, who is 81 years old and lives in Germany.

The teenager, 14-year-old Patryk Lessman, found the milk cans while on vacation with his family near Lake Jeziorak in May 2017. But it took a year for archaeologists to do a detailed inventory of the objects, as well as research and conserve them. The findings were presented at a news conference on May 4 in Ilawa, a town in northern Poland.

It's no wonder it took researchers so long to examine the objects, as there are many. The artifacts include the count's last will with the family seal and coat of arms, his personal documents and a diary dating to 1914-1918, during World War I. The milk cans also held glasses, hunting accessories, money, jewelry, a pocket watch, letters, family photos, a silver spoon and military decorations, as well as the Wehrmacht uniform, according to Science in Poland.

It wasn't clear from the Science in Poland statement whether the Nazi uniform belonged to the count. However, East Prussia was a German province during World War II, and many of the Germans who lived there fled in 1944 and 1945, especially as Russia's Red Army advanced, according to Encyclopedia Britannica.

Some of the historical documents uncovered in the milk cans, including the coins and banknotes, are now the property of Poland's state treasury, and will be put on display in a local museum. Museum staff also plan to translate the count's diary, Science in Poland reported.

"It is very rich correspondence and diaries conducted by Hans Joachim von Finckenstein in the years 1914-1919," Michał Młotek, a regional history researcher in Poland, told wyborcza.pl, a Polish news site. "It's a material with a huge historical load. We also drew our interest in two other documents, because they were written in Cyrillic, dated January 26 and February 3, 1945."

The count's daughter relayed some of her family's history. She and her sister Margarete were sent to a family in Western Pomerania — now a region divided between modern-day Germany and Poland — just a few months before Russia's Red Army arrived, Science in Poland said. Their father stayed at the estate and was arrested by Soviet soldiers in March 1945. He later died in a camp in the Polish town of Pasłęk.

The count's wife, Hildegarda, stayed at the estate, working for the Russians until November 1945, when she was reunited with her children in Germany. It's likely that Hildegarda is the one who buried the family's treasures in the milk cans, Młotek said.

One note in particular caught Młotek's eye: A letter by a Soviet officer who wrote, "Comrades and soldiers, please do not harm the inhabitants of this house. They welcomed us."

Historians also found a certificate dated a few days after the note that said all of the cattle, horses, pigs and poultry owned by the von Finckenstein family were now property of the Red Army Science in Poland reported.

After learning about the two milk cans, researchers searched the area with metal detectors to see if they could find any more artifacts. Młotek found a battle ax dating to the late Middle Ages and other searchers found the relics of a medieval fortified settlement, but they didn't find any more items relating to the count's family.

Młotek donated the battle ax to a museum in the town of Ostróda, Science in Poland reported.