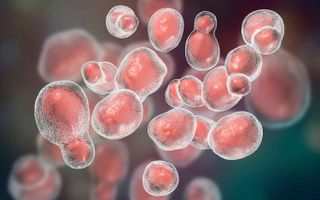 The idea of microbes joining forces inside your body to wreak havoc and cause disease sounds frightening — and it should. Now, scientists have found that a particular type of fungus does just that, and the fungal cells use a surprising method to team up and communicate with each other.

What's more, the findings may explain why this fungus can infect healthy people, a characteristic that's unusual for fungal infections, which more typically strike people with weakened immune systems.

The study focused on a fungus called Cryptococcus gattii, which lives in soil and is found mostly in tropical and subtropical regions. However, in 1999, a strain of this fungus popped up in British Columbia, Canada, and later, in Oregon and Washington state, mostly causing infections in otherwise-healthy people.

The infection, which people catch by inhaling fungal spores, can be life-threatening, causing a pneumonia-like illness in the lungs, as well as serious infections of the brain and tissues surrounding the brain and spinal cord. From 2004 to 2010, there were 60 reported causes of Cryptococcus gattii in the U.S., and among the 45 cases with known outcomes, nine (20 percent) died from their infections, according to a 2010 study from researchers at the Centers for Disease Control and Prevention.

Previously, researchers found that Cryptococcus gattii was so virulent because it had the "remarkable ability to grow rapidly within human white blood cells," study author Ewa Bielska, a postdoctoral research fellow at the University of Birmingham in the United Kingdom, said in a statement. In 2014, Bielska's colleagues found that this rapid growth resulted from a "division of labor," meaning that the fungal cells worked together to coordinate their behavior and drive rapid growth. [10 Bizarre Diseases You Can Get Outdoors]

In the new study, Bielska and colleagues figured out exactly how the fungal cells are joining forces: The microbes use microscopic, fluid-filled sacs called extracellular vesicles to communicate.

"These vesicles act like 'carrier pigeons,' transferring messages between the fungi and helping them to coordinate their attack on the host cell," said study senior author Robin May, director of the University of Birmingham's Institute of Microbiology and Infection.

This is the first time that scientists have found a connection between extracellular vesicles and fungal virulence, the researchers said.

The scientists also found that, surprisingly, the fungal cells could use extracellular vesicles to communicate across relatively long distances between cells.

"Our initial expectation was that the fungus would only be able to communicate within a single host cell, but in fact we discovered that it can communicate over very large — in microbiology terms — distances and across multiple host cell barriers," May said.

The finding "provides us with a potential opportunity to develop new drugs that work by interrupting this communication route during an infection," he said.

The study was published April 19 in the journal Nature Communications.