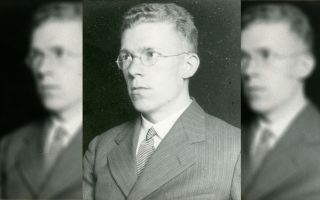 A personal photo from Hans Asperger’s files. This photo was edited for website template sizing, as well as for dust and scratch marks.
(Image: © Hans Asperger, National Socialsm, and "race hygiene" in Nazi-era Vienna/BioMed Central/under CC BY 4.0)

Hans Asperger, a pioneer in autism research whose name is used to describe high-functioning people with the disorder, had a previously unknown dark past that included sending children with disabilities to a "euthanasia" program run by the Nazi regime, according to new investigations into his long-lost files.

The new findings reveal that Asperger was far from a courageous defender of his patients against  "euthanasia" by the Nazis, as many people thought. Rather, he benefited from his cooperation with the regime and "publicly legitimized race hygiene policies, including forced sterilizations," according to a study published online yesterday (April 19) in the journal Molecular Autism.

Asperger also used "remarkably harsh" language to describe his young patients, even compared with professionals at the same facility who had patients with more severe disabilities, study researcher Herwig Czech, a medical historian at the Medical University of Vienna, wrote in the study. [Beyond Vaccines: 5 Things That Might Really Cause Autism]

Hans Asperger (1906-1980) wrote about autism in the late 1930s and early 1940s, but it was Leo Kanner's famous 1943 paper that laid the groundwork for describing the disorder, which is now defined as a neurodevelopmental condition that affects a person's ability to communicate, interact and behave typically with others in social situations.

Despite Asperger's early work on autism, he was forgotten by history until 1981, when scientists rediscovered and publicized his work. His research became so well-known that the term "Asperger's syndrome" was used to refer to people on the high-functioning end of the autism spectrum, who sometimes call themselves Aspies.

But in recent years, researchers started finding alarming clues about Asperger's behavior during the Nazi period in Austria, where he lived. These clues spurred the research of Czech, as well as Edith Sheffer, a senior fellow at the Institute of European Studies at the University of California, Berkeley, whose book "Asperger's Children: The Origins of Autism in Nazi Vienna" (W. W. Norton & Co., 2018) is due out May 1.

The new revelations are largely based on evidence that was long thought to have been destroyed during World War II: Asperger's personal files, political assessments by Nazi authorities and medical records from different institutions, including the notorious child "euthanasia" clinic Am Spiegelgrund, Czech said.

While Asperger never joined the Nazi party outright, he was a member of several groups affiliated with the regime, and was rewarded for his loyalty with career opportunities, Czech found. Moreover, case records from his Jewish patients reveal that "Asperger had an acute sense of their religious and 'racial' otherness and that anti-Semitic stereotypes sometimes found their way into his diagnostic reports," Czech wrote in the study.

However, Asperger's darkest actions revolve around his work with Am Spiegelgrund, where hundreds of children with disabilities were experimented on or murdered, Czech said.

For instance, in 1941 Asperger referred the "hopeless cases" of 3-year-old Herta Schreiber and 5-year-old Elisabeth Schreiber (no apparent relation to Herta) to Am Spiegelgrund, records show. Both little girls had mental disabilities and died of pneumonia not long after arriving at the clinic. In particular, Herta Schreiber was likely given barbiturates that ultimately led to her death, Czech found.

It's unclear whether Asperger, or the children's mothers for that matter, knew what awaited the children. "All we have to go by is Asperger's short note on Herta, in which he calls for her 'permanent placement' at Spiegelgrund — whether this was a conscious euphemism for murder or not, it is clear that he did not expect Herta to return," Czech wrote in the study. [11 Facts Every Parent Should Know About Their Baby's Brain]

Asperger was also part of a committee that reviewed the cases of 200 children in a psychiatric hospital, calling 35 of them "uneducable" and "unemployable," words that marked the children for "euthanasia," Czech found. It's challenging to know what happened to these children because the report doesn't list their names, but many of them likely died as a result of these damaging diagnoses, Czech said.

But Sheffer, the author of the new book, fervently disagrees.

"In light of this research, we should no longer use the term Asperger syndrome," Sheffer told Live Science in an email. "In medicine, eponymous diagnoses are granted to recognize individuals who first defined a condition as well as to honor their life. In my opinion, Asperger meets neither criterion."

Meanwhile, the term Asperger's syndrome is being phased out — not because of Asperger's past, but because psychiatrists say that it falls under the umbrella of autism spectrum disorders and should just be referred to as autism.

The Diagnostic and Statistical Manual of Mental Disorders (DSM), the American Psychiatric Association's guide for diagnosis, stopped including Asperger's syndrome in the DSM-5, which came out in 2013.

What's more, the International Classification of Diseases (ICD), which is used by the World Health Organization, will likely drop Asperger's syndrome in the ICD-11, which is due out in 2019, Adam McCrimmon, an associate professor of educational studies at the University of Calgary, wrote in The Conversation.