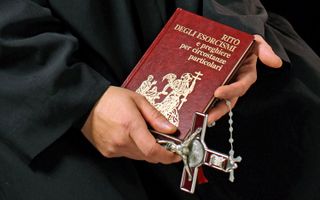 This might make your head spin — officials of the Roman Catholic Church are offering a week-long course in exorcism, and dozens of Catholic priests have flocked to Rome to partake of the Holy See's demon-banishing tips and strategies.

Titled Exorcism and Prayer of Liberation, the course is now in its 13th year, and is presented at The Pontifical Athenaeum Regina Apostolorum, a Catholic educational institution in Rome, in collaboration with the Group for Socio-religious Research and Information (GRIS), according to the course's website. An estimated 200 people — lay Catholics as well as priests — attended, Reuters reported.

From April 16 to 21, the would-be exorcists learn about issues they might encounter, including recognizing the devil, differentiating between possession and mental disorders, and legal protections for exorcists, according to a course outline. [Exorcism: Facts and Fiction About Demonic Possession]

Alongside the traditional exorcism techniques that you might already expect, such as sprinkling holy water or chanting Bible passages in Latin, this year's course offered a nod to the modern age by introducing a technical element for the exorcist's tool kit: a cellphone. Reuters noted that in one of the course's first sessions, Cardinal Ernest Simoni of Albania described assisting in exorcisms by reciting the Latin prayers over a cellphone.

"They call me and we speak, and that's how I do it," Simoni said.

This technical upgrade to demon banishment followed another recent concession to the 21st century, which took place last year. With the Vatican's permission, the United States Conference of Catholic Bishops (USCCB) created the first-ever English translation of the Roman Catholic Church's Latin rituals for exorcism, making it easier for a bishop exorcist to find a priest who could assist him, the religious news service the Catholic Herald announced in October 2017.

"Given that there's less facility in Latin than there used to be, even among priests, it opens the door to more priests to do this," Father Andrew Menke, executive director of the USCCB's Secretariat of Divine Worship, told the Catholic Herald.

Other sessions in the course included: The Auxiliary Exorcist: Requirements and Tasks; Symbolism in Magical-Occultist and Satanic Rituals; and Discerning the Extraordinary Actions of the Devil; and the week winds down with a Ministry of Exorcism roundtable, according to the outline.

An estimated half a million people seek exorcisms each year in Italy alone, and the demand for exorcisms worldwide is growing, BBC News reported. However, mental disorders and physical conditions such as epilepsy are the more likely explanations for accounts of so-called demonic possession — medieval and modern — according to a study published in 2014 in the journal Early Science and Medicine.

Completing the weeklong exorcism course currently underway in Italy provides attendees with a certificate, but that doesn't mean they're qualified to perform exorcisms for the Catholic church — only priests who have received a license or special permission from their bishop are permitted to officially raise a cross against the powers of darkness, course organizer and GRIS leader Giuseppe Ferrari told Reuters.

And, Simoni added, exorcism should be attempted only if medical doctors are unable to find a psychological or physical explanation for the "possessed" person's distress.