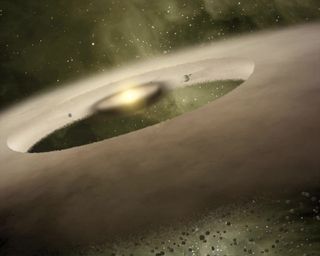 This long-lost planet would have existed at the very start of our solar system, billions of years ago. Shown here, an artist's illustration of a baby solar system forming, with a ring of debris around a young star.
(Image: © NASA/JPL-Caltech)

An asteroid that slammed into the Sudan desert on Oct. 7, 2008, shot out lots of little space rocks holding a precious secret: diamonds that likely formed billions of years ago inside the embryo of a now-decimated planet.

That lost planet was the size of Mercury or perhaps Mars, researchers now say.

In the space rocks, which are also called meteorites, researchers found compounds common to diamonds on Earth, such as chromite, phosphate and iron-nickel sulfides. It's the first time these diamond components have been found in an extraterrestrial body, the researchers said in a new study describing the findings. [See Photos of Meteorites Discovered Around the World]

The finding provides more information on the early days of our solar system about 4.4 billion years ago, when the zone near the sun had several planetary embryos. Many of them coalesced into the planets we see today. Others fell into the sun or were ejected into interstellar space.

The meteorites were formed after an asteroid slammed into Earth's atmosphere — making it technically a meteor — exploding 23 miles (37 kilometers) above the Nubian Desert in Sudan. The explosion from the 13-foot-wide (4 meters) body shot fragments all over the desert below. Researchers picked up 50 of these pieces, which ranged in size from 0.4 to 4 inches (1 to 10 centimeters).

Researchers collected these tiny meteorites into a collection called "Almahata Sitta"; this is the Arabic word for "Station Six," a train station nearby the meteorite fall and between Wadi Halfa and Khartoum. After collecting the tiny meteorites, researchers discovered nano-size diamonds inside them. But at first, the origins of the diamonds eluded researchers.

Nanodiamonds can form from "normal" static pressure inside a large parent body like Earth, but there are other origin theories as well. High-energy collisions between worlds in space can leave such diamonds behind, as can deposition by chemical vapor,according to a statement from the Federal Polytechnic School of Lausanne in Switzerland.

The new study, however, revealed that the diamonds in the meteorite could form only under pressures higher than 20 gigapascals. This is an extremely high form of pressure that humans can generate with certain explosives.

"This level of internal pressure can only be explained if the planetary parent body was a Mercury- to Mars-sized planetary 'embryo,' depending on the layer in which the diamonds were formed," the researchers said in a statement from the Federal Polytechnic School of Lausanne in Switzerland. Farhang Nabiei, a doctoral student at the institution, led the research.

That planetary embryo would have then been destroyed through violent collisions, the researchers noted.

The research was published online yesterday (April 17) in the journal Nature Communications.