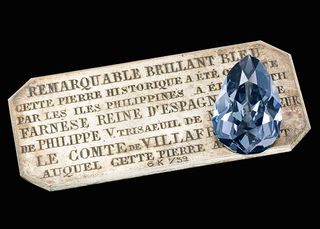 A very fancy, expensive diamond is about to be openly sold for the first time in its 300-year history.

According to Mining.com, the 6.16-carat, "dark grey-blue" Farnese Blue diamond, which comes from India, was extracted early in the bloody, brutal British colonization of the subcontinent in the 18th century. It comes from the Golconda mines — which is the source of many famous Indian diamonds that ended up in the hands of rich Europeans, including the Hope Diamond. [Sinister Sparkle: 13 Mysterious & Cursed Gemstones]

The Farnese Blue passed first into the hands of the Italian-born Elisabeth Farnese, queen of Spain as a gift on the occasion of her marriage to Spain's King Philip V, according to CNN.

It then passed between Spain, France, Italy and Austria for 300 years, always staying within the vast, interrelated network of European royal families. According to Sotheby's, which is handling the May 15 sale, it was "kept secretly in a royal casket" for much of that time.

"Excepting close relatives, and of course the family jewelers, no one knew of its existence," Sotheby's stated.

As is often the case, it isn't immediately clear who exactly currently owns the diamond and will profit from the Farnese Blue sale. (Sotheby's did not immediately return a request for comment.) The auction house stated that the stone is valued between $3.69 million and $5.27 million, though it's not uncommon for actual prices to rise higher in auction.

If history is any guide, the person who does profit from the sale won't be a descendant of diamond miners in India.