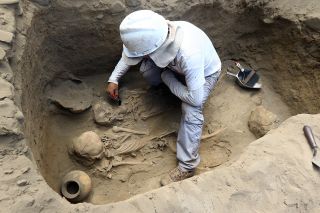 An archaeologist excavates a 1,500-year-old site in northern Peru on March 21. Researchers have found 77 burials belonging to a mixture of pre-Inca Chimú, Salinar and Viru cultures at this site.
(Image: © Peru excavation)

Construction workers in northern Peru recently uncovered a grisly discovery: The skeletal remains of 47 ancient people, including those of at least 12 children who were likely sacrificed by the ancient Chimú culture about 1,500 years ago.

The children's chest bones had cut marks on them, likely a sign of an attempt to break their ribs so that their hearts could be removed, archaeologist Víctor Campaña León, director of the Las Lomas Archaeological Rescue Project, told La República, a Peruvian newspaper.

After finding the bones, the workers — who were laying down drinking-water pipes in the beach town of Huanchaco — notified archaeologists. In the following excavation, the researchers unearthed 77 tombs and burials, as well as camelid bones (likely from vicuña or alpaca) and 115 vessels from the Chimú, Salinar and Virú cultures, La República reported. [25 Cultures That Practiced Human Sacrifice]

In addition to the 12 children, "We have also found a neonate, a newborn, who has also been sacrificed," Campaña León said in Spanish. The excavations began on Oct. 23, 2017, and are projected to end on June 23, 2018, according to Andina, a Peruvian news outlet.

This is hardly the first evidence of human sacrifice in pre-Columbian societies. Archaeologists have also uncovered the remains of sacrifice victims associated with the Inca, Maya and Aztec cultures. Meanwhile, human sacrifice was also practiced in ancient Rome, China and Japan, as well as at Cahokia, an early Native American city located by modern-day St. Louis, Live Science previously reported.

In the case of the Chimú discovery, it's possible these children were sacrificed with the hope of encouraging the gods to bring rain to the arid region,  Campaña León said, according to Newsweek.

The Chimú civilization lasted from about A.D. 900 to 1470, when the Inca conquered them, according to the Encyclopedia Britannica. The Chimú people are known for their pottery, textiles, irrigation and metalwork with gold, silver and copper. In fact, the Chimú capital, called Chan Chan, is recognized by the United Nations Educational, Scientific and Cultural Organization(UNESCO) for its "absolute masterpiece of town planning."