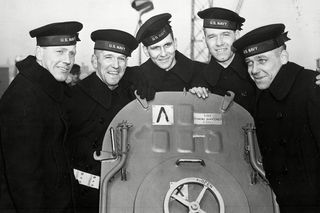 The five Sullivan brothers — from left to right: Joseph, Francis, Albert, Madison and George — pose onboard the USS Juneau at the time of her commissioning ceremonies at the New York Navy Yard.
(Image: © AP/REX/Shutterstock)

On St. Patrick's Day (March 17), the discovery of a long-lost WWII shipwreck offered a bittersweet ending to the tale of five Irish-American brothers who served on the vessel and died together when it sank.

Crew members aboard the research vessel R/V Petrel found the remains of the USS Juneau during an expedition mounted by Vulcan Inc., an ocean exploration and conservation company created by Microsoft co-founder Paul Allen. Their discovery, described in a statement by Vulcan Inc. representatives, marks the watery grave of the Sullivan brothers — George, Francis, Joseph, Madison and Albert.

The Sullivans refused to serve in the U.S. Navy unless they could serve together, and they were granted permission to do so despite a Navy policy that prohibited assignment of family members to the same ship, according to the Naval History and Heritage Command (NHHC) website. Stationed on the USS Juneau, the brothers lost their lives — along with 682 of their shipmates — on Nov. 13, 1942, when a Japanese torpedo destroyed the ship during the Battle of Guadalcanal (code-named Operation Watchtower by U.S. forces). [See Images of the USS Juneau Battleship]

Discovering the final resting place of the Irish-American brothers on St. Patrick's Day was "an unexpected coincidence," Robert Kraft, director of subsea operations for Allen, said in the statement.

Wreckage of the Juneau was first detected by sonar pulses from the R/V Petrel's autonomous underwater vehicle (AUV), which spotted the remains in South Pacific waters near the Solomon Islands, at a depth of about 13,700 feet (4,200 meters), according to the statement. The crew then deployed a remotely operated vehicle (ROV) to confirm the sighting and capture images of the wreck.

Underwater footage captured by the ROV and shared to YouTube on March 19 offers a somber view of the Juneau as it lies on the ocean floor, crumbling into ruin and blanketed by anemones and algae.

Previously, Allen's research vessels also identified the wreck of the WWII Italian naval destroyer IT Artigliere, sunk in 1940, and the remains of the U.S. aircraft carrier USS Lexington, sunk in 1942. The Lexington was dubbed "The Ship That Saved Australia" after helping to defeat Japanese forces during the Battle of the Coral Sea.

The tragic story of the fallen Sullivan brothers shocked the nation, and President Franklin D. Roosevelt penned a letter to their mother offering "the condolence and gratitude of our country," and affirming that "we, who remain to carry on the fight, must maintain the spirit in the knowledge that such sacrifice is not in vain," the NHHC reported.

Their deaths also inspired the U.S. Navy to name two destroyers The Sullivans. On Feb. 10, 1943, a ship under construction known as The Putnam was re-named The Sullivans. After that ship was decommissioned in 1965, the second The Sullivans destroyer debuted on April 19, 1997; the ship's official motto is "We stick together," according to the NHHC.