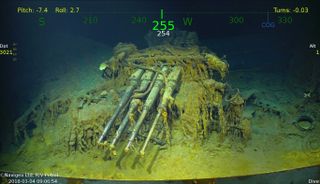 Lying on the floor of the Coral Sea some 500 miles (800 kilometers) off the eastern coast of Australia, the wreckage from the USS Lexington, a U.S. aircraft carrier used in World War II, appears frozen in time, covered in the detritus of the sea.

An expedition aboard the research vessel Petrel — funded by Microsoft co-founder Paul Allen's company, Vulcan Inc. — discovered the huge wreck about 2 miles (3,000 meters) below the sea surface. It had been lying there for 76 years.

"Lexington was on our priority list because she was one of the capital ships that was lost during WWII," Robert Kraft, director of subsea operations for Vulcan Inc., said in a statement from the company. "Based on geography, time of year and other factors, I work with Paul Allen to determine what missions to pursue. We've been planning to locate the Lexington for about six months and it came together nicely."

The carrier, nicknamed Lady Lex, was commissioned as a battle cruiser (similar to battleships but built for speed), though in 1925, it was launched as an aircraft carrier. From May 4 to 8, 1942, Lady Lex and the USS Yorktown faced off against three Japanese carriers in the Battle of the Coral Sea. The U.S. carriers delivered a serious blow to the Japanese forces advancing on New Guinea and Australia, according to the statement.

Even so, the USS Lexington and 216 of its crew did not survive the clash.

On May 8, Lady Lex was damaged when it was hit by multiple torpedoes and bombs, though the final blow came from a secondary explosion that led to out-of-control fires. The conflagration caused the crew to abandon ship. That evening, to prevent its capture, the USS Lexington was scuttled; the USS Phelps sank the crippled carrier once 2,770 crew and officers had been rescued, according to the statement.

"As the son of a survivor of the USS Lexington, I offer my congratulations to Paul Allen and the expedition crew of Research Vessel (R/V) Petrel for locating the 'Lady Lex,' sunk nearly 76 years ago at the Battle of Coral Sea," Harris Jr. said. "We honor the valor and sacrifice of the 'Lady Lex's' sailors — all those Americans who fought in World War II — by continuing to secure the freedoms they won for all of us."