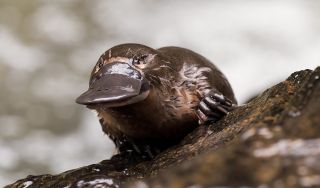 The platypus feeds its young with milk excreted from its belly.
(Image: © Laura Romin and Larry Dalton)

The milk of the platypus may contain a protein that can fight drug-resistant bacteria.

Now, a new analysis of that protein reveals that its shape is as bizarre as the shape of the animal that excreted it. The protein has a never-before-seen protein fold, now dubbed the "Shirley Temple" thanks to its ringlet-like structure, according to researchers from the Commonwealth Scientific and Industrial Research Organization (CSIRO) and Deakin University in Australia.

"Platypuses are such weird animals that it would make sense for them to have weird biochemistry," study researcher Janet Newman of CSIRO said in a statement.

Platypuses are monotremes, or egg-laying mammals. They suckle their young, but they don't have teats or nipples. Instead, they "sweat" milk from glands on their bellies. Baby platypuses gather around their supine mother, lapping up puddles of milk from her skin.

Many types of mammal milk have antibacterial properties, according to a 2014 paper in the journal Genome Biology and Evolution. Platypus milk may be particularly protective, though, because baby platypuses are exposed to many pathogens throughout their infancy. Their milk sits on their mothers' exposed skin, and they live in microbe-rich burrows as soon as they hatch. [Mammal Milk: How the Fat Measures Up (Infographic)]

Newman and her colleagues replicated an unknown protein from platypus milk in a laboratory and then studied its structure, discovering the unique ringlet shape. They reported their findings March 14 in the journal Structural Biology Communications.

"Although we've identified this highly unusual protein as only existing in monotremes, this discovery increases our knowledge of protein structures in general, and will go on to inform other drug discovery work done at the center [CSIRO]," Newman said.