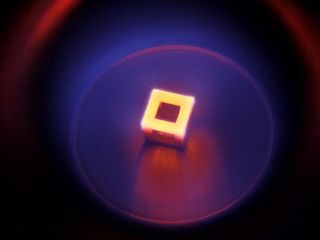 3D-printed titanium glows in the intense heat of a plasma microwave chamber. When it's ready to come out, the implant will be coated with diamonds.
(Image: © RMIT University)

If you're the sort of person who enjoys wearing diamond jewelry on the outside of your body, scientists have some great news for you: Blinged-out medical implants (such as hip or knee replacements) could be yours one day, thanks to a new diamond-coated titanium material fabricated in Australia.

But it's not just about making your innards look fabulous; diamond-coated implants will likely be more compatible with the human body and less prone to infection than the pure titanium implants commonly used, the researchers said. [7 Genius Uses For 3D Printing in Medicine]

"Currently the gold standard for medical implants is titanium, but too often titanium implants don't interact with our bodies the way we need them to," study co-author Kate Fox, a senior lecturer at RMIT University, said in a statement. "To work around this, we have used diamond on 3D scaffolds to create a surface coating that adheres better to cells commonly found in mammals."

In the study, the researchers made a fine diamond coating using detonation nanodiamonds —extremely tiny (just a few millionths of a centimeter long) synthetic diamond crystals that are typically created through a controlled explosion. While natural diamonds can take billions of years to form in the Earth's mantle, detonation nanodiamonds take only a few minutes to create in a lab (hopefully, a lab with very understanding neighbors) and are relatively cheap, Fox said.

Instead of setting off an explosion, however, the RMIT researchers created their synthetic diamonds using a machine called a chemical vapor diamond (CVD) plasma chamber. In a CVD chamber, a continuous blast of superhot microwaves heats methane and hydrogen gases up to 1,000 degrees Celsius (1,832 degrees Fahrenheit), turning them into a super-reactive plasma capable of forming diamond crystals on certain surfaces.

So, the researchers placed a 3D-printed piece of titanium scaffolding into the CVD chamber and turned on the microwaves. Once removed, the titanium was successfully coated in diamonds — a technological first, the researchers said.

These diamond-coated implants still need to be tested in humans, but Fox said she is confident that they will prove more compatible and less infection-prone than the pure titanium implants used today.

"The diamond enhances the integration between the living bone and the artificial implant, and reduces bacterial attachment over an extended period of time," Fox said. "Not only could our diamond coating lead to better biocompatibility for 3D-printed implants, but it could also improve their wear and resistance. It's an exceptional biomaterial."

Diamond coatings have been used previously in various medical technologies, including artificial heart valves, drug-delivery systems and prosthetics. Ask your doctor about a prescription for diamonds today.