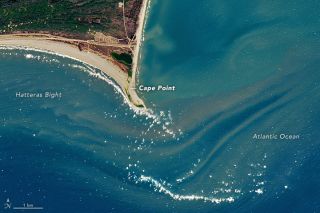 A sandbar island that seemed to form overnight off the coast of North Carolina has disappeared once again, thanks to a series of punishing hurricanes and storms.
(Image: © NASA )

Blink and you'll miss it: A mysterious island that emerged off the coast of North Carolina overnight is gone once again, new satellite images reveal.

Shelly Island, a sandbar that appeared seemingly overnight off the coast of Cape Point on Cape Hatteras National Seashore in 2017, has disappeared again, due to a series of punishing storms that battered the coast and redistributed the sand off the shoreline. The new images, taken on Feb. 16, were captured by the Operational Land Imager (OLI) on the Landsat 8 satellite, which launched in 2013 as a collaboration between NASA and the U.S. Geological Survey.

It's not clear exactly why Shelly Island formed in the first place. But experts suspect that the conditions were just right in July 2017, when winds and currents whipped sands from the northern barrier islands toward the southern point of the cape. At that time, the winds died down, and circular currents formed by the shoals heaped up sand to create the flash-formed island, according to NASA's description of the image. Shelly Island was at its largest extent in August 2017, when it measured 27 acres (11 hectares), according to The Virginian-Pilot. It became a tourist attraction, with kayakers and snorkelers coming in droves to see the newly formed island.

However, the most recent images show it has once again receded beneath the waves. Erosion may have been the culprit, as Hurricanes Irma, Jose and Maria — which struck in the early fall of 2017 — split the island in half, with one half joining with the cape and another small speck left out at sea. Over the winter, a series of storms continued to chip away at the tiny piece left of the island. And by February, it was completely gone.