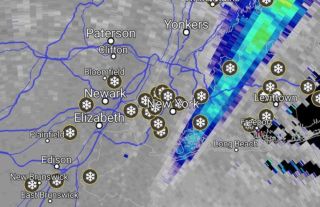 For miles above the highest spires of New York City, the ice has turned. Uncountable billions of ice crystals, each of them just about a millimeter in length, have spontaneously organized. All together at once, as if hearing (or delivering) some unheard instruction, they are pointing. That way. That way. That way.

Follow the lines of their frigid tips and you'll find an invisible thing of enormous power: a massive field of electrical force, stretching over much of the length of the storm. That field is the source of the lightning bolts and thundersnow (loud claps that accompany some snowstorms) that are being heard across Manhattan today.

It's March 7, the day of a powerful nor'easter stretching from Maryland to Boston, and National Weather Service Storm Prediction Center forecaster Joey Picca said this sort of strange alignment — which happens inside clouds — isn't incredibly rare or surprising. But it is unusual enough for forecasters to start geeking out. [7 Crazy Things That Happen Only When It's Really Cold]

"People get really excited when they hear about thundersnow [the most obvious sign of the turning ice], because it's out of the norm," Picca told Live Science. "We don't experience it every day or every month, even, at that. But with our observation capabilities, we do see some thundersnow from time to time with the stronger storm systems."

Those observation capabilities are pretty new. Scientists have only been able to watch the ice crystals align this way on radar for the last six or seven years, Picca said, thanks to advances in sensing technology. And with modern radar, we can see that the effect is dramatic.

"There are ice crystals up in the cloud, especially at higher altitudes," Picca said.

And during a violent storm, those crystals move fast, following the system's internal winds. Up. Down. Up. Down. Rubbing against one another, passing the storm's electrons around, sorting themselves by electric charge. The effect is a bit like what you get when you slide in your socks across the carpet, or rub a balloon against your hair, except it's on the scale of towering clouds covering whole cities and states.

"These little, tiny ice crystals are low-inertia, so they just kind of go with the strengthening field as it changes," Picca said. (Inertia indicates whether a blob of matter can resist changes to its motion.)

A strengthening electrical field causes more and more of the crystals to align, until they form patterns you could spot with your naked eye if you flew past the right part of the cloud. [Weirdo Weather: 7 Rare Weather Events]

That massive act of alignment is visible to modern radar systems, and it's strange-looking.

For much of the last decade, Picca said, radar systems have sent out two-dimensional pulses of energy. Their pulsing waves wiggle along, in both horizontal and vertical directions. Under normal circumstances, when the pulses bounce off cloud particles, meteorologists can measure how much vertical and horizontal energy has returned to determine the average shape of the individual particles they're looking at.

When those pulses pass through the long fields of electrically aligned crystals now floating over New York, they change the radar beam's shape. The results become strange, turning up an impossible-seeming data pattern that meteorologists call depolarization.

The crystals shunt the waves from one plane to another, making it look like most or all of the energy was along just one of their two-dimensional wave's axes. Because the beams go from two poles to one, meteorologists call the effect depolarization. Right now — or at least as of 11:48 a.m. — a massive streak of it appeared on weather radars over northern New Jersey and New York City.

And that, Picca said, is a sign of an impending lightning strike — the tens of thousands of volts per meter Picca said are stretched across these storms releasing in a single zap toward the ground.