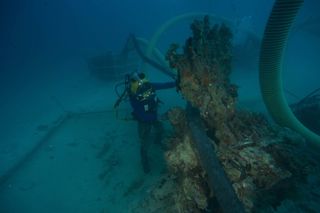 More than 70 years ago, during World War II, a U.S. pilot was shot down as he was flying over the Pacific. Over the decades, sand and sea life at the bottom of the ocean covered the wreckage, further obscuring it from view.

But now, members of the U.S. armed forces have retrieved the remains of the pilot, as well as his plane, which were found near Ngerekebesang Island, in the Republic of Palau.

"We did a four-point moor on top of the aircraft and then it really got busy," Capt. Mike Flanagan, a civilian mariner and master of United States Naval Ship (USNS) Salvor, a Navy rescue and salvage ship at the excavation site, said in a statement. "The aircraft had been untouched for about 74 years. It’s been a long time since I’ve seen a military detachment working this hard for this long, seven days a week." [7 Technologies That Transformed Warfare]

The recovery team completed the mission on Feb. 25, but won't release the identity of the human remains until it can verify whose they are and notify the next of kin, the U.S. 7th Fleet said in the statement.

The mission was coordinated by a number of teams: The Defense POW/MIA Accounting Agency (DPAA) sent out an Underwater Recovery Team staffed by U.S. Army, Navy and Air Force service members. Moreover, Department of Defense civilians served aboard the USNS Salvor.

"It's very labor-intensive work and they've had a large amount of bottom time making this operation successful," Lt. Cmdr. Tim Emge, 7th Fleet salvage officer, said in the statement. "The Mobile Diving and Salvage Company 1-6 divers for this job have been pulling more than 12-hour days for the past two months."

In particular, the Underwater Recovery Team "spent weeks excavating the area using a variety of archeological tools and meticulously inspecting the bottom sediment in their search and recovery of the missing personnel from World War II," Emge said.

Divers on the team used the USNS Salvor's decompression chamber when they surfaced. The team members also made use of the ship's 40-ton-lift crane, which can lift "large and heavy objects off the bottom of the ocean," Flanagan said.

As the Underwater Recovery Team excavated the ocean floor, Military Sealift Command mariners with the U.S. Navy helped above water. The mariners operated cranes that moved the lift salvage baskets, and some archaeologist-trained crew members looked for World War II remains by sifting through the sand.

"It’s [a] very meticulous process," civilian mariner Jean Marien, chief mate of the USNS Salvor, said in the statement. "There was a lot of sand — a never ending supply."

"It took multiple dives to fill a sifting basket. Each dive lasted about an hour and the baskets took 5 [hours] to 6 hours to fill,” Marien said. "Sometimes we had two baskets going at the same time."

The mission is part of the United States' commitment to recover personnel lost during World War II, the U.S. 7th Fleet said in the statement.