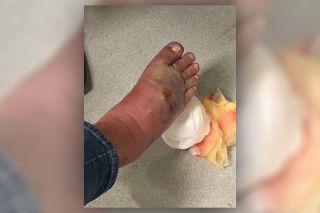 A Texas man who thought he had a simple blister on his foot turned out to have a life-threatening infection with flesh-eating bacteria, according to news reports.

The 26-year-old man, Raul Reyes, is a day care teacher in Houston, according to the Houston Chronicle. Reyes hurt his foot one day at work, and later noticed some swelling. A few days later, he developed a blister, which he thought was just caused by his shoes, Reyes' wife, Joseline, told the Chronicle. But when he woke up the next day, the blister had expanded to cover his entire foot, so he went to the emergency room, Joseline Reyes said.

Reyes was hospitalized on Feb. 23, and went into emergency surgery. Doctors tried to save Reyes' foot, but it wasn't possible — despite their efforts to remove the deadly bacteria "they had to amputate his foot in order to save his life," Joseline Reyes said.

Reyes was diagnosed with necrotizing fasciitis — a serious bacterial infection that destroys skin and muscle tissue, according to the Centers for Disease Control and Prevention (CDC).

Several types of bacteria can cause necrotizing fasciitis, including group A Streptococcus (group A strep), Klebsiella, Clostridium, Escherichia coli and Staphylococcus aureus, according to the CDC. Most commonly, people get necrotizing fasciitis when the bacteria enter the body through a break in the skin, the CDC says. In Reyes' case, doctors suspect the bacteria got into his body through an open wound from an ingrown toenail, the Chronicle reported.

The bacteria can spread quickly once inside the body, and symptoms of necrotizing fasciitis can start within hours of an injury. The skin may become red or purplish from the infection, and some people get ulcers, blisters or black spots on their skin, according to the CDC. Patients with the infection often experience pain that they describe as hurting much more than they would expect based on how their wound looks, the CDC says.

Now that Reyes' foot has been amputated, his family has created a GoFundMe page to raise money for a prosthetic foot.

Although Reyes is still in the hospital, "he's improving more every day," Joseline Reyes said. "He just really wants to get back to work and go back to a normal life," she said.