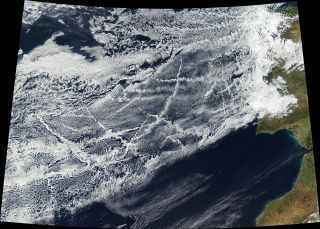 NASA's Aqua satellite was orbiting over Portugal back in January when it snapped the above photo. It shows a thin film of clouds above the brilliant blue of the North Atlantic, slashed with white lines of thicker clouds that look like scars or etchings.

Those thicker clouds, NASA officials explained in a description of the image, are signs of ship traffic below. When ships power their way through the ocean, they pump exhaust into the atmosphere, just as cars do. And those massive plumes of particles can "seed" clouds, causing new cloud droplets to form.

That's because pollution particles, especially sulfates, are water-soluble, so water droplets cling to them, NASA officials said. Get enough of those particles in one place, as from the plume of a ship, and they can seed the creation of a whole new cloud easily visible from space. [Holey Clouds: Gallery of Formations Cut by Airplanes]

"Some of the criss-crossing clouds stretch hundreds of kilometers from end to end," NASA officials wrote.

The thinner tips of the clouds are the newer ends, closest to the ships that created them, the agency explained. The thicker tips are older, and farther away. In this image, many of the visible slashes of ship-plume clouds are likely the result of many ships passing along crowded shipping lanes on their way to Europe or North Africa, NASA officials wrote.

It's likely that these sorts of clouds are having some effect on the global climate, according to NASA. But given the competing effects of the white clouds reflecting sunlight back into space and the particulates changing the atmosphere, scientists aren't yet sure what it is.