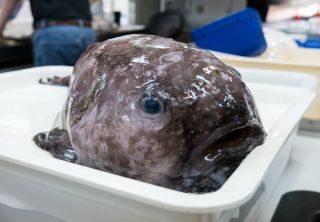 Cookiecutter sharks that glow in the dark, phallic peanut worms and uncannily displeased-looking blobfish were never meant to see the light of day.

And yet, they are among more than 100 deep-sea species recently scooped up off Australia's coast in a mission to identify animals that live in these barely explored, extreme underwater habitats.

For a month in 2017, the research vessel Investigator sailed across the eastern Australian abyss from Tasmania to Queensland, mapping and sampling the seafloor at depths of up to nearly 3 miles (4,800 meters) — more than 100 times deeper than most scuba divers will ever reach. [See Photos of the Freakiest-Looking Fish]

Using special nets, sleds and other tech, the research team on board collected more than 42,700 fish and invertebrate specimens representing more than 100 types of animals, possibly including new species. This week, scientists gathered at the CSIRO Australian National Fish Collection in Hobart, Tasmania, to thoroughly examine and identify those specimens collected during the "Sampling the Abyss" voyage.

"For those of us aboard, it was a real buzz to see the amazing fishes … as they emerged from the nets, and we're looking forward to the opportunity to take a closer look at them in Hobart this week," Museums Victoria ichthyologist Martin Gomon said in a statement from CSIRO.

The extreme conditions of the deep sea — just-above-freezing temperatures, crushing pressure, and scarce light and food — produce some strange-looking creatures. Among the star discoveries of the voyage was a "faceless fish" collected from 2.5 miles (4,000 m) below the surface. This creature hadn't been seen since the 1870s, when the first and only other specimen was dredged up off the coast of Papua New Guinea.

The researchers also picked up a shortarse feelerfish, the second such specimen ever to be found in Australia, which has short, spindly fins and small vestigial eyes. They found hermaphroditic, predatory lizard fish, and they think they might have some cousins of the gelatinous blobfish (Psychrolutes marcidus), which has been dubbed the world's ugliest animal.

"The abyss is the largest and deepest habitat on the planet, covering half the world's oceans and one-third of Australia's territory, but it remains the most unexplored environment on Earth," Alastair Graham, manager of the Australian National Fish Collection, said in the statement. "The survey collected some very rare and unusual species, and represents one of the deepest collections of fishes from Australian waters."

Researchers involved in the project have also said that another goal of the survey is to understand how humans might be affecting these remote environments.

"There wasn't a day at sea when we didn't bring up some rubbish from the seafloor — cans, bottles, plastic, rope, fishing line," expedition leader Tim O'Hara, senior curator of marine invertebrates at Museums Victoria, wrote in The Conversation shortly after the voyage. "There is also old debris from steamships, such as unburned coal and bits of clinker, which looks like melted rock, formed in the boilers."