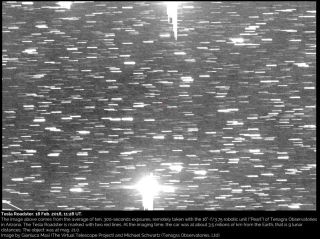 See that unbelievably tiny speck of light? That's the Tesla Roadster and Starman, its steadfast mannequin driver, that SpaceX launched into our solar system about two weeks ago on Feb. 6.

Starman and the Roadster were so remote — about 2.1 million miles (3.5 million kilometers) away from Earth — that it was challenging to get a good shot. But like any decent paparazzi, scientists tracked their target and captured an incredible image on Feb. 18.

"Its apparent brightness is extremely low, 40 million times fainter than the Polaris star," Gianluca Masi, an astrophysicist, founder and director of the Virtual Telescope Project in Italy, which helped capture the photo, told Live Science in an email. [Interstellar Space Travel: 7 Futuristic Spacecraft to Explore the Cosmos]

The team members pinpointed the Roadster by relying on data from their own observations, as well as from NASA's Jet Propulsion Laboratory and the Minor Planet Center, which tracks minor bodies in the solar system, Masi said. Once they knew where to look for the car, they took a handful of images and averaged them to get a good signal-to-noise ratio.

In fact, tracking the Roadster has become a hobby for Masi and Schwartz. They captured other images of the space-flying car on Feb. 8, just two days after SpaceX's Falcon Heavy rocket lifted it out of Earth's atmosphere. At the time of those photos, the Roadster was about 292,000 miles (470,000 km) away from Earth, Masi said.

It's remarkable how the dot of light captured on Feb. 8 looks much larger than the speck taken on Feb. 18. Soon, it will be so far away that researchers will need a 3.2-foot (1 meter) or larger telescope to see it, Masi said.

"I must say, I was really excited to capture it, [even though] it is so faint now," Masi said. "We have been observing it every clear night, and this one was likely one of our final opportunities to see it."