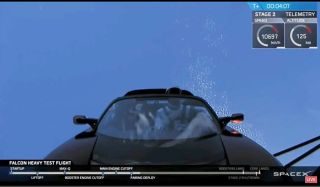 The Tesla Roadster just launched aboard a Falcon Heavy rocket on its maiden voyage on Feb. 6, 2018.
(Image: © SpaceX)

A mannequin called "Starman" was the star of yesterday's (Feb. 6) spectacular maiden launch of the SpaceX Falcon Heavy rocket. The spacesuited "dummy" — named after a famous David Bowie song – sat at the wheel of a Tesla Roadster, as SpaceX transmitted spectacular views of the nearby Earth.

Late last night, Eastern Time (Feb. 7), Starman's rocket finished an engine "burn" that pushed the car out of Earth's orbit and on a trajectory that will bring the vehicle through the asteroid belt, according to a tweet by SpaceX founder Elon Musk.

How long will Starman stay in touch with Earth? SpaceX has been coy about how the video and communications were relayed back to Earth — the company didn't answer a query from Inverse — but we can make some guesses based on general knowledge. The answer depends on how much power the spacecraft has available, and whether the antennas Starman communicates with are strong enough to receive the signal. [Radiation Will Tear Elon Musk's Rocket Car to Bits in a Year]

Spacecraft usually communicate using radio waves, according to NASA. Antennas on the ground receive these signals. Then, the radio waves get processed to gain information from the spacecraft: scientific data (such as pictures), the spacecraft's location in space and how healthy the craft is (based on readings from its instruments).

Spacecraft need a source of power to send a signal. Most Earth-orbiting satellites use solar power because it's so abundant around our planet. Spacecraft located farther out in the solar system, however, don't have as much sunlight available — the sun is too far away. The NASA New Horizons probe that flew past Pluto in 2015, for example, used plutonium to power its instruments. The European Rosetta mission's Philae lander on Comet 67P/Churyumov-Gerasimenko used batteries during its short life. (It was supposed to use solar power as well, but it landed in a shady spot and couldn't get enough light from the sun.)

Once the spacecraft sends its information, an antenna on the ground has to receive that signal. For faraway missions, this is quite a challenge, because the signal is extremely faint. The two farthest-traveling spacecraft to communicate with Earthlings: NASA's Voyager 1(which passed into interstellar space in 2012) and Voyager 2, which is far out in the solar system. To hear from these spacecraft, NASA uses a network of huge antennas called the Deep Space Network. The antennas are located in California, Spain and Australia, and the largest ones are 230 feet (70 meters) in diameter, according to NASA.

So how long will Starman keep communicating as he flies to the asteroid belt? It's hard to say. The transmitter needs to have enough power, and the antennas SpaceX uses need to be able to communicate with Starman. Until SpaceX releases more information, we will have to wait. [What Is the Point of Elon Musk's Big Rocket?]

Nevertheless, Starman's view of Earth was impressive enough to keep space-exploration fans happy for a while. SpaceX broadcast a live view of Starman, using different videos to flip around the spacecraft, for more than 4 hours after the launch. As Bowie once sang, look at this caveman go.