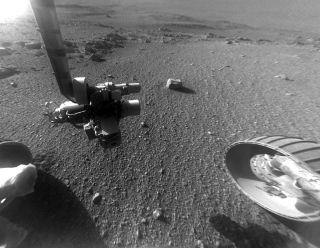 "Rock stripes" recently discovered in Mars' Perseverance Valley could be further evidence of water on the red planet.
(Image: © NASA/JPL-Caltech)

NASA's Mars rover Opportunity was exploring an uncharted Martian valley last month when it encountered a shockingly familiar sight: Streams of rocks and gravel stretched down the hillside of Perseverance Valley — a roughly 600-foot (183 meters) drop down the inner slope of a crater — in seemingly organized rows.

The patterns closely resemble so-called "rock stripes" seen on certain mountains on Earth, NASA said in a statement. These formations usually result when wet soil freezes and thaws repeatedly over many years, NASA said. Perseverance Valley is thought to have been carved hundreds of thousands of years ago by a combination of water, ice and wind — already making the spot unusual by Martian standards, NASA wrote. The presence of these newly discovered stripes further adds to the region's mystery, researchers said. [The 7 Most Mars-Like Places on Earth]

"Perseverance Valley is a special place," Opportunity Deputy Principal Investigator Ray Arvidson of Washington University in St. Louis said in the statement. "We already knew it was unlike any place any Mars rover has seen before, even if we don't yet know how it formed, and now we're seeing surfaces that look like stone stripes. It's mysterious. It's exciting. I think the set of observations we'll get will enable us to understand it."

In particular, the rock stripes of Perseverance Valley closely resemble stripes seen inside the cone of Hawaii's Mauna Kea volcano, according to NASA. There, stripes form when fine-grain soil freezes overnight and expands, pushing up larger chunks of rock on either side. After the soil thaws in the morning, wind and gravity gradually move these larger stones downslope from the moist, fine-grain segments of soil.

When repeated hundreds of thousands of times, these alternating regions of fine and heavy rocks create a distinct striped pattern.

Researchers don't yet know how these patterns came to appear in a Martian crater, but the scientists have a few hypotheses. One leading explanation involves the planet's obliquity — or the tilt of Mars' equator relative to its orbit — which is thought to alter significantly over hundreds of thousands of years. If the planet's obliquity were to change enough, water currently frozen at the poles could vaporize into the atmosphere and turn to snow or frost closer to the equator, NASA said.

"One possible explanation of these stripes is that they are relics from a time of greater obliquity, when snow packs on the rim [of the valley] seasonally melted enough to moisten the soil, and then freeze-thaw cycles organized the small rocks into stripes," Arvidson said.

Further study of the region will be required — and, for now, the Opportunity rover seems up to the task. The golf-cart-size rover landed on Mars in January 2004 to begin what was supposed to be a 90-day mission hunting for clues about Martian water. The rover took this image of Perseverance Valley on Jan. 4, 2018 — the rover's 4,958th day in action.