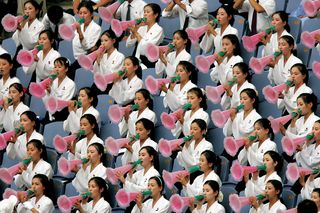 North Korean women cheer during the opening ceremony of the 16th Asian Athletics Championships in Inchon, west of Seoul in this August 31, 2005 file photo. Some North Korean cheerleaders who took part in athletic events in the South have been jailed at a prison camp after returning home, a survivor of another camp said on February 17, 2005, quoting recent defectors from the communist state. Twenty-one young women were accused of revealing their experience in the South against a code of silence to which they swore, said Kang Chol-hwan, who himself escaped the North in 1992, quoting North Korean defectors now in China. Authorities could not verify the report.
(Image: © Kim Kyung-Hoon/Reuters/Newscom)

The breakout stars of the 2018 Winter Olympics aren't skiers or figure skaters. They're 229 North Korean cheerleaders who have wowed the international media with their synchronized chants and identical outfits.

The cheerleaders have made headlines throughout the games for everything from their fashion choices to their tightly supervised hotel conditions and bathroom visits to their reaction to the surprise appearance of an impersonator playing Kim Jong-un, North Korea's authoritarian leader.

No one really knows North Korea's motivation behind sending this unusual squad to the Pyeongchang games, but experts in the country's policy believe it may be an attempt to retain a little bit of limelight and soften the closed-off country's image. Whether it's working, though, seems to be an open question. [In Photos: North Korea's Cheerleading Squad]

The North Korean squad, sometimes known as the "Army of Beauties," has appeared at several Asian sporting events since 2002. According to The New York Times, which interviewed a defector who used to be on the squad, the women are chosen for their looks, height, talent and family connections. They're tightly controlled, with handlers shepherding them from event to event and even to meals at the Olympic Games. The job comes with the privilege of travel outside of North Korea's famously restrictive borders, but it might also bring danger. In 2006, South Korean newspaper The Chosun Ilbo reported that 21 cheerleaders on the squad had been sent to prison camp, possibly for breaking their oath not to discuss what they had seen on a trip to the Busan Asian Games in South Korea.

The anonymity of the individual women and their eerie synchronization is novel to outsiders, said Nancy Snow, a professor of public diplomacy and a specialist in propaganda at Kyoto University of Foreign Studies in Japan.

"Every time you see them performing, a lot of press is right there getting close-ups trying to get some sort of a tell to see if, gosh, can they be like us?" Snow told Live Science. "But there's still this distance there."

As a propaganda effort, Snow said, the cheerleaders might be a "softening agent" meant to keep the North Korean regime on the global stage and to subtly smooth over relationships between it and its Asian neighbors. It's no mistake the group sent to do the job is female, she said — the squad's look and demure refusal to do anything more than smile and mouth inoffensive platitudes plays into notions of traditional femininity.

"We can't help but look and try to maybe get eye contact," Snow said.

"It provides a different picture than this kind of bleak country where everyone is oppressed," Culver told Live Science. That message is likely tailored toward South Korea, she said; the Kim regime is being buffeted by economic sanctions against it and would probably like to see steps like the reopening of Kaesong, an industrial region in North Korea where South Korean companies can employ North Korean workers. That region closed amidst tensions in 2016.

The Olympics have always been a place for political or diplomatic messaging, said Patrick Merle, an assistant professor of communication and information at Florida State University who was involved in coverage of the 2004 Athens Olympics as a journalist. The Summer Olympics, being larger and involving more countries than the Winter Olympics, are more typically a political platform, Merle said. In 1936, Berlin hosted the summer games under the leadership of Chancellor Adolf Hitler, who attempted to use them to showcase what he saw as Aryan superiority — and who was partially stymied when African-American track star Jesse Owens won four gold medals.

In 1968 in Mexico City, two black athletes raised their fists in what one called a "human rights salute" to protest the treatment of black Americans. The 2016 Summer Games in Rio hosted an all-refugee team, which not only gave displaced athletes an opportunity to compete, but highlighted the plight of people driven from war-torn nations.

It's harder to pinpoint whether these international messages effect much change, Merle told Live Science. On their own, he said, they probably have a limited impact.

"It's a soft-power approach where it definitely raises awareness, it puts the issue on the public-opinion agenda and that is in essence already a first good step to changing minds and to changing perspectives and changing attitudes," he said. "But you need more."

The impact of North Korea's cheerleaders appears mixed. The British newspaper The Guardian interviewed South Korean spectators at a hockey game where the cheerleaders were present. Some said the squad made them feel closer to North Korea; others expressed sympathy for the women.

However, if attention is the goal, the cheerleaders seem to be snapping that up in large amounts. The squad has been the subject of intense media attention, to the extent that the women were unable to complete a planned walk on the beach on Feb. 14 because of a scrum of journalists.