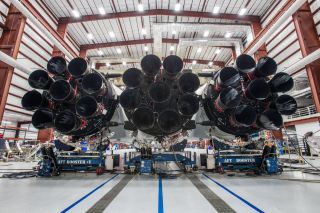 The 27 engines of SpaceX's Falcon Heavy rocket are front and center during assembly in this photo tweeted by Elon Musk on Dec. 20, 2017.
(Image: © SpaceX/Elon Musk)

If everything goes according to plan, a very big rocket will take off from Florida today (Feb. 6). It will rise beyond Earth's orbit and enter a highly elliptical orbit around the sun — periodically passing close to Mars.

The story of the SpaceX Falcon Heavy's test flight is two things at once: a step toward a mechanism for cheaper commercial space hauling, and — at least as importantly — a massive publicity stunt.

Musk spends an enormous amount of energy cultivating a nerd-hero aura and friendly press. The man stuck propane torches on Airsoft guns and sold them for $500 a pop as "flamethrowers" to promote his widely criticized plan to add more miles of highway to Los Angeles. He routinely advertises his space transport company as a tool for colonizing Mars despite limited evidence of a plan for how people would survive there, news outlets have reported. His electric-car company Tesla is promoted as an environmental project despite concerns about the vehicle's actual environmental impact (at least as of today) and broader questions about whether switching from gas cars to electric ones would actually represent a significant blow against climate change.

And there's a reason he does this: It's enormously profitable. Musk's personal brand has arguably elevated the market capitalization of Tesla, for example, beyond even Ford and General Motors, despite capturing just a fraction of their share of the auto market.

When the Falcon Heavy launches from the pad at Kennedy Space Center that once supported Apollo 11, it will carry the apotheosis of this sort of Muskian marketing: a "midnight cherry" Tesla Roadster playing David Bowie's "Space Oddity."

Other observers have noted just how far this payload leans into Tony Stark absurdism. Astronomer and writer Phil Plait wrote for Syfy.com, "Putting a car into orbit around Mars seemed, well, profligate. Why not put up some sort of basic scientific package, or even better a CARE package for future astronauts loaded with water, food and equipment?"

But Plait acknowledged the commercial appeal.

Beyond brand building, and dooming a cherry Tesla to a billion years in lonely orbit, the interesting thing about the Falcon Heavy is that it's big and cheap.

The Falcon Heavy won't be the largest or most powerful rocket ever built. As Space.com reported, both of those titles still belong to the Saturn Vs that most famously carried the Apollo missions. And they won't be bested until NASA completes its Space Launch System sometime down the road.

But where the Heavy loses out on sheer size and power, it wins on cost efficiency. The rocket, for the moment, will be the most powerful active launch system in the world at a low-Earth-orbit payload capacity of 140,660 lbs. (63,800 kilograms). But each launch, according to SpaceX, will cost just $90 million. That's $639.80 per pound.

The Falcon Heavy also represents a significant savings when compared to SpaceX's existing Falcon 9, which can carry 50,265 lbs. (22,800 kg) into low Earth orbit at a rate of $62 million. That comes to about $1,233 per pound, nearly double the cost of launching a payload on the Heavy.

This kind of efficiency and savings is certainly impressive, and it certainly matters — particularly to governments and corporations interested in delivering payloads into orbit, as well as to the extent of Musk's personal fortune.

And the Falcon Heavy is certainly an impressive rocket, as these things go. It will make a big noise when it launches. A future Falcon Heavy might also carry a human crew. It will also, in theory and eventually, pull off the Falcon 9's neat trick of landing upright and being reusable on Earth after launches — a feat of recycling that both represents SpaceX's most impressive act of technological innovation and an extraordinary cost-savings measure.

But all of that said, the Falcon Heavy just doesn't represent any particularly amazing new frontier in rocketeering.