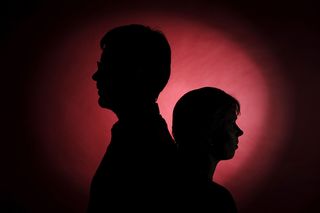 Imagine you're sitting in a coffee shop, fiddling with your laptop, when nature calls. You decide to ask one of the people sitting near you to watch your computer while you use the bathroom. To your surprise, the person sitting to your left looks suspiciously like Emmy Award-winning nonagenarian Betty White, and the person on your right is a dead ringer for Al Capone. Whom do you ask to watch your property — the Golden Girl, or the gangster?

There is no right or wrong answer, but whether the choice seems obvious will likely depend on your prior experience, a new study suggests.

Researchers found that your ability to trust strangers is dependent on the stranger's resemblance to other people you know to be trustworthy or untrustworthy. [5 Ways Your Emotions Influence Your World]

In the study, published today (Jan. 29) in the journal Proceedings of the National Academy of Sciences, researchers describe this appearance-bias phenomenon as a "Pavlovian" response by the emotional learning regions of your brain. In other words, certain parts of your brain are conditioned to trust others thanks to their resemblance to friendly faces.

"Our study reveals that strangers are distrusted even when they only minimally resemble someone previously associated with immoral behavior," lead study author Oriel FeldmanHall, an assistant professor in Brown University's Department of Cognitive, Linguistic and Psychological Sciences, said in a statement. "Like Pavlov's dog — who, despite being conditioned on a single bell, continues to salivate to bells that have similar tones — we use information about a person's moral character … as a basic Pavlovian learning mechanism in order to make judgments about strangers."

For the study, FeldmanHall and her colleagues recruited 91 participants to play a basic computerized trust game. The participants were given $10 to invest with three potential "partners," each of whom was represented by a different headshot on a computer screen. Any money invested with a partner was automatically quadrupled (a $2.50 investment with any partner would yield a $10 return, for example), at which point the partner could either split the profit with the player or keep it all.

After being conditioned with these trustworthy and untrustworthy faces, each participant played a second game with a new group of potential investment partners. Unbeknownst to the players, many of the new faces they saw were morphed versions of their same partners from the initial game. When the players were again asked to pick an investment partner, they consistently chose the faces that most closely resembled the trustworthy partner from the previous game and rejected the faces that most resembled the untrustworthy partner.

Neural scans of the participants also revealed that the same regions of their brains were at work when initially learning whether to trust a partner in the first experiment and when deciding whether to trust a stranger in the second experiment. Brain activity looked strikingly similar when participants learned that a partner was untrustworthy and when they subsequently decided not to trust a stranger.

"We make decisions about a stranger's reputation without any direct or explicit information about them based on their similarity to others we've encountered, even when we're unaware of this resemblance," senior study author Elizabeth Phelps, a professor in New York University's Department of Psychology, said in a statement. "This shows our brains deploy a learning mechanism in which moral information encoded from past experiences guides future choices."