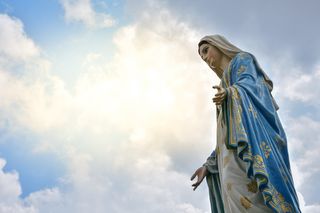 This Virgin Mary statue resides at The Cathedral of the Immaculate Conception in the city of Chanthaburi in Thailand.
(Image: © Shutterstock)

A tense exchange between a congressman and a CNN reporter delved into the theological realm yesterday (Jan. 24). In the process, it highlighted a common misconception about … the Immaculate Conception.

After the Federal Bureau of Investigation reported that it cannot provide to the Justice Department five months of texts between two FBI employees because a technical glitch during an agency-wide phone upgrade erased them, Rep. Matt Gaetz, R-Florida, called the missing texts "the biggest coincidence since the Immaculate Conception." The implication was that the missing texts point to a conspiracy to frame President Donald Trump for collusion with Russia during his campaign.

CNN's Chris Cuomo was confused by the analogy: "What do you think happened with the Immaculate Conception?" he asked Gaetz on his show. "Where is the analogy?"

Gaetz's confusion isn't uncommon. Even Catholic Answers, a laity-run organization for evangelism, acknowledges that people sometimes think the term refers to Mary's conception of Jesus without a human father, but that event is called the Virgin Birth, according to Catholic doctrine.

Instead, the Immaculate Conception refers to Mary having been conceived without original sin. In Catholic belief, everyone is born without full sanctification, except Mary.

"Mary was preserved by these defects by God's grace," according to Catholic Answers. "From the first instant of her existence she was in the state of sanctifying grace and was free from the corrupt nature original sin brings."

Immaculate Conception was enshrined in Catholic doctrine in 1854, when Pope Pius IX defined the dogma in a pronouncement called Ineffabilis Deus. Interestingly, the Immaculate Conception is one of only two papal pronouncements "ex cathedra," meaning under the authority of the pope as the infallible mouthpiece of God. The second also had to do with Mary, according to a 2011 article in U.S. Catholic, and confirmed her bodily Assumption into heaven rather than standard spiritual death. [7 Quite Unholy Pope Scandals]

However, most Protestants object to the idea of the Immaculate Conception. Protestants argue that original sin is universal, based on Bible verses like Romans 3:23, which states, "All have sinned and fallen short by the glory of God."

Cuomo, son of former New York Gov. Mario Cuomo, was raised in a Catholic household and married in a Roman Catholic wedding ceremony. Gaetz is Protestant; he is a member of a Baptist church in Florida. In that sense, the debate over a theological analogy during the prime-time news may have been a reflection of the schisms in Christianity that date back to the 16th-century Protestant Reformation, when reformist religious denominations broke away from the Catholic Church.

Doctrine aside, little is known about Jesus Christ as a historical person. Most historians do believe he existed and that he was born between 2 B.C. and 7 B.C. in the village of Nazareth. Historians also think Jesus really was baptized by John the Baptist, but most scholars argue that he saw himself as a religious reformer rather than the establisher of a new faith.