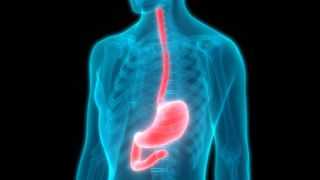 A 14-year old boy in Missouri who appeared to choke on a ham and cheese sandwich turned out to have a rare immune condition that can injure the esophagus, according to news reports.

The boy, Alec Hebblethwaite, was eating the sandwich between soccer games in May 2017, when he seemed to start choking and experiencing chest pain, according to Fox News. He was rushed to the hospital, where doctors discovered that there was a tear in his esophagus. But when they operated in order to repair the tear, they found that the wound was infected, and Alec had developed sepsis, a potentially life-threatening condition caused by the body's reaction to an infection, Fox News reported.

Choking on a sandwich shouldn't lead to these symptoms, but it wasn't until Alec spent more than 100 days in the hospital that doctors found the real culprit: a chronic immune system disease called eosinophilic esophagitis. [27 Oddest Medical Cases]

When a person has eosinophilic esophagitis, white blood cells called eosinophils build up in the lining of the esophagus, according to Mayo Clinic. This buildup can occur as a reaction to foods, allergens or acid reflux, the Mayo Clinic says.

The condition causes inflammation in the esophagus, which in turn leads to tissue damage that can make it difficult to swallow or cause food to get stuck in the throat. The inflammation can also make it easier for the esophagus to tear, which can occur during retching or during certain medical procedures that use a tool called an endoscope, according to Mayo Clinic.

The condition affects about 1 in 1,000 children, according to the National Organization for Rare Disorders.

Patients with eosinophilic esophagitis may need to modify their diet to remove foods that can trigger flare-ups of the condition. Alec's doctors recommended that he stick to soft foods, and stop eating bread, Fox News said.

"They said that if we had waited 12 more hours before taking him to the hospital, he would have died," Alec's mother, Kasey Hunter, told Metro UK.

Alec still needs to go to the hospital every few weeks for treatment, which involves inserting a balloon-like device into his esophagus to stretch it, according to Metro. Stretching the esophagus can help with swallowing, according to Mayo Clinic.