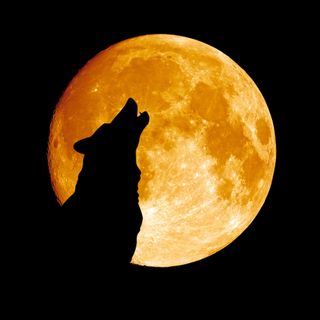 New Year's Day is a time for resolutions and hangovers, but this year, it also provides a chance to see the moon in all its glory.

The first day of 2018 brings a "Full Wolf Moon" — the biggest of two supermoons that will rise in January.

A supermoon occurs when the moon is at perigee — its closest point to Earth in its monthly orbit — around the same time as a full moon. The moon looks slightly larger and brighter than average at these times.

The moon that will be visible on New Year's Day will appear bigger than usual, but most people will not notice the difference. However, thanks to a phenomenon called the "moon illusion," the moon may appear bigger when it's close to the horizon, so this New Year's supermoon may be most impressive when it's rising.

The Full Wolf Moon gets its name from the hungry wolves that would howl outside Native American villages during these January full moons, according to the Farmer's Almanac. However, some people argue that the names for the full moons actually come from Anglo-Saxon culture, according to timeanddate.com.

In any case, wolves do not howl more during the supermoon, studies show. In fact, wolves do not howl at the moon at all, but rather at each other to communicate, according to "The Wolf Almanac, New and Revised: A Celebration of Wolves and Their World" (Lyons Press, 2007). [6 Wild Ways the Moon Affects Animals]

Many supermoon myths have tied the unusually bright celestial object to a variety of spooky outcomes. Some believe supermoons make people go crazy. Others claim supermoons trigger natural disasters. The vast majority of these supposed effects (such as increased emergency-room visits) have not been borne out by studies, Live Science previously reported.

Though the moon will be at its closest point to Earth on Jan. 1, the moon will gradually appear bigger and brighter over the coming days. And those who were too busy working out or still nursing a hangover on the evening of Jan. 1 shouldn't despair: Another supermoon (this one a Blue Moon, or the second full moon in a calendar month), will occur Jan. 31, Space.com reported. That later supermoon will also be involved in a total lunar eclipse, in which the Earth's shadow totally covers the moon, making it a Blood Moon as well.

Editor's Note: This article was updated to remove a reference to the Full Wolf Moon being 11 percent larger than average. That is how much much bigger the Blue Moon at the end of January will be.