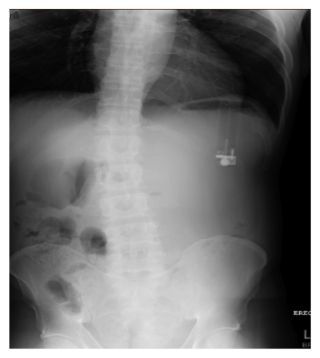 One Florida man's stomach pain turned out to have an unusual cause: A lighter that the man had swallowed was leaking lighter fluid into his gut, according to a recent report of the man's case.

The 49-year-old went to the emergency room in October 2016 complaining of stomach pain, nausea and vomiting, according to the case report, which was published online in August in the journal Case Reports in Emergency Medicine.

Though the man's blood and urine tests were normal, an X-ray revealed a curious finding: "a foreign body resembling a cigarette lighter … within the stomach," the doctors who treated the man wrote in the report. [27 Oddest Medical Cases]

The doctors removed the lighter using a tool called an endoscope — a thin, flexible tube with a camera and forceps that's inserted into the mouth and down into the stomach. The camera revealed that the lighter, which was upside down in the man's stomach, had leaked so much fuel that the man had developed an ulcer, or hole in his stomach lining.

This is only the third case in the medical literature of someone swallowing a lighter that then needed to be removed, and it's the first time that it has happened in the U.S., according to the case report. In the two previous instances, doctors needed to remove the lighters because they had caused blockages in the bowel, but the new case was more urgent, because the lighter was leaking fluid.

The chemicals found in lighter fluid are particularly toxic, but in fact it was the man's stomach acid that was responsible for tearing a hole into his gastric tissue. The lighter fluid facilitated this by eating away at the protective mucus layer that separates the stomach lining from stomach acid, according to the report. With no mucus left to act as a buffer, the patient's unchecked stomach acid was free to wreak havoc and cause an ulcer.

"Ulcers from foreign bodies are not that common," said Dr. Asim Shuja, a gastroenterologist at the University of Florida College of Medicine who treated the man. But in rare instances, certain objects — especially batteries, which can leak battery acid — can cause problems, Shuja said.

But ulcers like those caused by swallowing the leaky lighter should heal, as long as the object is removed and the ulcers are medicated quickly, Shuja told Live Science. In the man's case, he was given medicine for the ulcer, which had healed by his two-month followup appointment.

Most of the time, when someone swallows something other than food, the object will pass through the person's digestive tract and out the other end with no issues other than discomfort. Frequently swallowed items included dentures, chicken bones or household items, according to a 2012 study published in the journal Deutsches Ärzteblatt International.

But sometimes, people swallow things on purpose, and mental illness or a desire to self-harm plays a role. In this case, the patient was known to have schizophrenia and had previously been hospitalized after he swallowed a spoon.

"Our patient had a history of ingesting objects like spoons [and] razor blades in the past," Shuja noted.

In many cases, these patients develop worsening symptoms related to their psychiatric illnesses over time, he said.