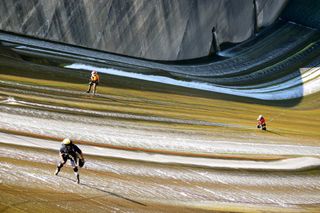 Dam-inspection workers dangle on the face of the Shasta Dam, the eighth-tallest dam in the United States.
(Image: © Bureau of Reclamation Central Valley Project)

Cover your eyes if you've got acrophobia, or a fear of heights: A recent Bureau of Reclamation photo may give you the shudders.

In the image, released on the bureau's Central Valley Project Twitter feed on Aug. 31, three dam-inspection workers dangle on the face of the Shasta Dam, the eighth-tallest dam in the United States. The 602-foot-tall (183 meters) monolith holds back the waters of the Sacramento River in northern California, creating Shasta Lake. The dam is key to irrigating California's agriculture-intensive Central Valley, according to the National Park Service, and it also prevents the upstream flow of brackish water from the San Francisco Bay.

The Shasta Dam is 72 years old, though, and like any septuagenarian, it needs the occasional checkup. That's what workers were doing in August when they rappelled down the watery face of the dam: checking for cracks, leaks or any other signs that the structure needs maintenance. [Lessons From 10 of the Worst Engineering Disasters in US History]

To find out what it's like to do this work, Live Science spoke with Monte Brewer, a mechanical engineer at the Lahontan Basin area office of the Bureau of Reclamation, in Carson City, Nevada. Brewer is also the team lead of the rope access team pictured on the Shasta Dam. This interview has been edited lightly for length and clarity.

Live Science: How do you get to be on the rope access team that does these dam inspections?

Monte Brewer: Years ago, when I was first hired on, I was at a conference, and members of the Reclamation board were doing a presentation on the rope team and some of the jobs they'd done. And I thought to myself, "That is the kind of job I want."

About two months later, my supervisor got a call from the mid-Pacific region team asking if there were any mechanical engineers that wanted to be on the team. I got set up from there.

LS: Were you a climber before you started with the rope team?

Brewer: I was not a climber, not a rock climber or anything like that. A little bit of an adrenaline junky, yes. When I saw this, I thought this was a cool opportunity to do things on dams and structures that most people don't get to climb on. I like to do fieldwork, so anything out of the office is good for me.

Brewer: All of us on the rope access team, it's not our primary job — it's an extra duty that we get to go do from time to time.

But the day-to-day of rope access jobs — for me, I do a lot of planning and a lot of making sure that rescue plans are in place and what the job plan is and who will be doing what during the day.

We get to the job site, go through our safety briefs and our rescue briefings, and do our other coordination. In the Shasta job, we were doing a boat coordination, because we we're getting down into a boat at the bottom of the dam because it's 600 feet down.

We spend most of the day as a climber, where we're completing some work or doing an inspection. In inspections, lot of times, we have to have radio communications, and we're reporting to a notetaker.

Sometimes, we get to climb cool stuff. But the Shasta job — it was 112 degrees [Fahrenheit, 44 degrees Celsius] out there, and we're out there for 12-hour-long days.

LS: How often do you go out?

Brewer: Some years, we may climb only two or three weeks a year, total; then other years, we might climb 30 to 40 days a year, and that's the climbing days outside the training days. I've been on jobs, like one back in 2010 that was 17 days straight of 16-hour days of climbing. [The 7 Most Extreme Jobs in Science]

LS: What are you looking for out there?

Brewer: On this Shasta job, we were doing a visual and a sounding test of the structural integrity of the concrete of the spillway. Visually, we were looking for cracks, spalls, offsets and joints — things of that nature. For soundings, we use a geologist pick or a hammer and tap the concrete every couple of square feet. If it's got a nice sharp "ping" sound to it, that means in general, the concrete is pretty sound. If you get more of a drummy or hollow sound, that means there could be some sort of delamination or a cold joint that's not visible.

When we find an area — a spall or a drummy spot or something — we establish what the extent of it is. On this one, we were reporting surface area and volume quantities to later be tallied up, and this is all going to be for a specification and a job coming up sometime in the future to get some repairs done.

In general, Reclamation has got a lot of concrete that's old, like 100 years old. Concrete over time does start seeing some problems. The Shasta Dam was in satisfactory condition and no problems there, but there are small spots on the surface that need to get a little bit of a touch-up.

LS: What's the actual experience of hanging on the side of one of these dams like?

Brewer: It's fun; it's cool. I definitely think you need to be a person who's not afraid of heights. They build these two-rope redundant systems that we're working on, so the risk of getting hurt is really low, in all actuality. Even though you know your system is a good redundant system, the first couple times you climb over a 600-foot cliff or drop down in a hole where you know the only way to get rescued is to pull yourself or have someone pull you up 300 feet [90 m] of rope, there's definitely some nerves that can kick in.

At first, when you're a new climber, it almost seems like the kind of job you're trying to do is the climbing. After you get more seasoned or broken in, it almost seems like the ropes are just a taxicab to get you to the work you're trying to do. It's hard and strenuous work, though. We were there three days total for the Shasta job. We worked 12- to 14-hour days, partially because we heard at the end of the week, it was only supposed to get hotter. The dam is pretty much south-facing, and there's a lot of heat coming off that. There was a little bit of water designed to come through the normal discharge valves. It's kind of a pain in the butt to be wet when you're trying to do that work, but staying a little bit cooler with having that water on your feet and legs was quite refreshing.

LS: Are there other aspects of dam maintenance that are particularly interesting?

Brewer: I have another bunch of cool jobs, but they're inside of dams. I get into the technical stuff. Most of them are on ropes where we might be setting a highline system, so it's basically making a crane out of rope to get either people or equipment up or transport it some distance. I really like getting into that stuff because it's a lot of equipment, a lot of rigging and a lot of itty-bitty details that you'vegot to be paying attention to.

We also have dive teams for these inaccessible features, to make sure we are getting these inspections done and taking care of a lot of these little problems. We do have good, safe reliable dams going into the future.