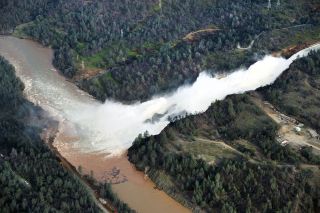 More than 100,000 people were evacuated from below the United States' tallest dam on Sunday, after an auxiliary floodway threatened to fail.

The Oroville Dam in Northern California looked poised to release floodwaters from Lake Oroville into the Feather River, threatening thousands of homes and businesses. According to the Los Angeles Times, rains had filled the reservoir to capacity, sending water over the dam's emergency spillway for the first time. On Sunday (Feb. 12), a hole developed in the spillway, prompting the evacuation order. As of Sunday evening, the reservoir level had dropped enough to ease the pressure on the spillway, but more rain was forecast, triggering a race against time to repair the dam's spillways with sacks of rocks dropped by helicopter.

The situation is still dangerous, officials emphasize, and a look back at some of the most notable dam failures in history shows what's at stake. [Lessons From 10 of the Worst Engineering Disasters in US History]

In August 1975, Typhoon Nina rolled over Taiwan and headed for the Chinese mainland, where it collided with a cold front and dumped a massive amount of rain over Henan, a province in central China. What happened next was a 1-in-2,000-year flood.

This rain swelled rivers and reservoirs, most notably the Banqiao Reservoir, which was held back by the Banqiao Dam. The dam was built in 1952 and had about only half of the sluice gates recommended by hydrologists, according to a 2013 history of the disaster in The Economic Observer, a Chinese newspaper. On Aug. 8, 1975, as local residents desperately tried to shore up the structure with sandbags, the dam collapsed. A wall of water rushed downstream, destroying 62 smaller dams in its path. Approximately 171,000 people were killed in the flood and its aftermath, making the Banqiao Dam disaster the deadliest dam failure in history.

For as long as humans have tried to harness waterways for their own uses, there have been failures. The Great Dam of Marib, in what is now Yemen, was an engineering marvel of the ancient world. Built around the eighth century B.C., the 2,100-foot-long (650 meters) mud dam held back a reservoir that formed the basis of a 39-square-mile (100 square kilometers) irrigation system, according to National Geographic. The dam did its job for more than 1,000 years.

But at some point in the mid-sixth century A.D., the dam was breached. The Koran describes the disaster as punishment for the tribe of Saba refusing to accept Allah.

"We sent upon them the flood of the dam, and We replaced their two [fields of] gardens with gardens of bitter fruit, tamarisks and something of sparse lote trees," the text reads.

Whatever death or destruction the breach left behind is lost to history (as is the cause of the failure), but the impact on the civilization around the dam was dire. The loss of the irrigation system triggered a mass migration out of the area.

That's the legend, at least. A paper published in 2000 in the Journal of Archaeological Science used radiocarbon dating of the sediments behind the dam and found that it may have collapsed much earlier than oral histories suggest, around the third century A.D., at the latest. The silting of the reservoir and the declining economic importance of the area as a caravan stop may have been as much of a death knell as the dam breach, the paper concluded.

The Teton Dam in Idaho was short-lived. This earthen dam was meant to generate hydroelectric power and irrigate southeastern Idaho. Instead, it collapsed the first time its reservoir was filled.

The problem? Seepage. The geology under the dam was volcanic rhyolite, marked by extensive cracking and fissuring. The U.S. Bureau of Reclamation, which built the dam, knew that below-ground seepage of water could occur through these fissures. However, engineers thought that injections of grout into the ground at the base of the dam could seal off the seeps.

Not so much. As the reservoir approached capacity on the morning of June 5, 1976, small leaks began to pop up on the right side of the dam. By midmorning, a hole had formed in the dam face, and a whirlpool was swirling in the reservoir like water over the drain in a bathtub. A bulldozer sent to try to fill the hole sank into the hole instead, according to a 1992 article published in the Geological Society of London publication Geology Today.

Just before noon, the dam failed, shooting 10,876 cubic feet (308 cubic meters) of water downstream. Fortunately, quick warnings led to hasty evacuations and only 11 people died in the flooding, though thousands of head of livestock and many homes were lost, according to the U.S. Bureau of Reclamation. Investigations afterward showed that the fissures under the dam, combined with the fluffy, not-so-impenetrable loess soil that made up the dam's core, led to the collapse.

The worst dam failure in U.S. history, however, was the Johnstown Flood. This 1889 disaster in Pennsylvania killed 2,209 people, including 396 children, according to the Johnstown Area Heritage Association. In 99 cases, entire families were wiped out together.

According to a 1989 narrative of the flood, heavy rain had filled the streets of Johnstown with water on May 31, 1889, not an uncommon occurrence in the river valley town. But the rain that day was record-breaking, and the South Fork Dam upstream of Johnstown was crumbling. Local residents worked feverishly to dig a second spillway, clear debris from the first and add height to the dam, but it was all for naught. At around 3 p.m., the dam collapsed. A wall of water 40 feet (12 m) high thundered down the valley. In 2009, hydrologists calculated that 423,776 cubic feet (12,000 cubic m) of debris-choked water rushed down the valley per second. That's comparable to a low-flow day on the Mississippi River, but crammed into a narrow river valley.

Water was the source of much controversy in California in the early 1900s. As Los Angeles grew, the city's water needs began to conflict with the needs of farmers in the eastern part of the state. The power struggles that arose from the need for water would go down in history as the California Water Wars — and wars they were. The Los Angeles Aqueduct, an irrigation channel that brought water to the thirsty city of L.A., was dynamited multiple times.

It was against this backdrop that the St. Francis Dam fell. The dam, completed in 1926, was the brainchild of William Mulholland, general manager of the Bureau of Water Works and Supply in Los Angeles, leader of the Los Angeles Aqueduct project and namesake of Hollywood's Mulholland Drive. The reservoir held by the dam was intended to be an emergency water supply, in case the Los Angeles Aqueduct was damaged by an earthquake.

During the construction of the dam, Mulholland ordered two increases in the dam's height by 20 feet (6 m), but didn't substantially widen its base, according to Water and Power Associates, a nonprofit educational organization. This additional height, combined with unstable geology around the dam, weakened the structure and made collapse all but certain, according to geologists.

The dam took two years to fill and was always prone to some seepage. On March 12, 1928, new leaks appeared. Mulholland and some colleagues personally inspected the structure and declared it safe. Less than 12 hours later, it collapsed.

No one who saw the collapse survived, but it must have happened rapidly and with great force: A motorcyclist passed by 7 minutes before the collapse and noticed nothing amiss. The largest surviving section of the crumpled concrete structure, which weighed 10,000 tons, was found three-quarters of a mile downstream, according to Water and Power Associates.

Officially, about 450 people died in the disaster, though the real number may have been higher because the floodwaters rushed through areas where migrant workers were camped, according to the Los Angeles Times.

Mulholland's career ended with the dam collapse. Though he was not criminally charged, he told the coroner's inquest, "Don’t blame anyone else, you just fasten it on me. If there was an error in human judgment, I was the human." California rapidly passed laws tightening dam safety and requiring the registration of civil engineers after the catastrophe.