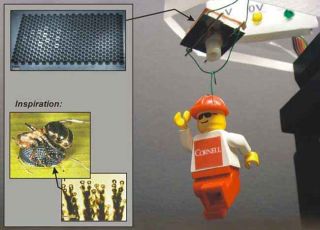 A prototype of the Switchable Electronically-controlled Capillary Adhesion Device (SECAD) holds its own weight plus this lego guy against a Plexiglas substrate.
(Image: © Mike Vogel/Paul Steen, Cornell University)

A new high-tech suction device could allow humans to walk on walls like Spider-Man or create adhesive devices that could be turned on and off with the flick of a switch.

The contraption, inspired by a beetle that can hold on to a leaf with a force 100 times its weight, uses the surface tension of water to make an adhesive bond, but it does so with a creative twist. It could be used to create sticky shoes or gloves, researchers said today.

The device consists of a flat top plate riddled with tiny holes, each just a few hundred microns (a millionth of a meter) wide. A bottom plate holds water. In between is a porous layer. A 9-volt battery powers an electric field that forces water to squeeze through the tiny holes in the top layer.

The surface tension of the exposed droplets makes the device grip another surface — much the way two pieces of wet glass stick together. Turn the electricity off, and the bond breaks.

"In our everyday experience, these forces are relatively weak," explained Paul Steen, professor of chemical and biomolecular engineering at Cornell University. "But if you make a lot of them and can control them, like the beetle does, you can get strong adhesion forces."

More work is needed to create a version of the device that would hold a human to the side of a building, however. One prototype has 1,000 holes and can hold about 30 grams, or roughly 70 paperclips. But tests showed that with more and smaller holes, a 1-inch square device could hold 15 pounds.

Another possible use would be covering the droplets with thin membranes, making the device exert outward pressure.

"You can think about making a credit card-sized device that you can put in a rock fissure or a door, and break it open with very little voltage," Steen said. "It's a fun thing to think about."

The device is detailed online this week in the Proceedings of the National Academy of Sciences. The research was funded by the Defense Advanced Research Projects Agency (DARPA) and the National Science Foundation.