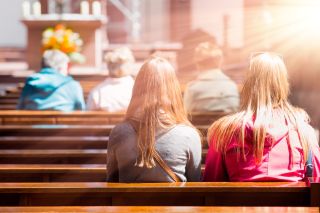 Both believers and nonbelievers tend to think atheists are less moral.
(Image: © muratart/Shutterstock)

Even people who don't believe in God judge other nonbelievers as less moral than religious types, new research finds.

The study showed that in 13 very different countries, people were more likely to think that a serial killer must be an atheist rather than a believer. These findings persisted even in highly secular countries such as Finland and China; they were also true even for people who reported zero belief in God.

"Even as secularism reduces overt religiosity in many places, religion has apparently still left a deep and abiding mark on human moral intuitions," study researcher Will Gervais, a psychologist at the University of Kentucky, wrote with his colleagues Aug. 7 in the journal Nature Human Behaviour. [8 Ways Religion Impacts Your Life]

Though there's no precise count of the number of atheists worldwide, the group of nonbelievers seems to be growing. In the United States, about 3 percent of adults call themselves atheist, and 4 percent say they're agnostic, according to a 2014 Pew survey. Those numbers were up from 1.6 percent and 2.4 percent, respectively, in 2007. (Nearly 16 percent of American adults also said that they were "nothing in particular" with regard to religion as of 2014 but did not explicitly disavow belief in God.) However, because there is a social stigma against atheism, some researchers think that atheists are undercounted. A 2017 study that asked the question more indirectly — by having participants count statements that were true about them, including some statements about religious belief — estimated that about 26 percent of Americans are nonbelievers. In 2016, an annual survey in Norway found that 39 percent of the population identified as atheist — more than the 37 percent who said they were religious.

Still, atheists get a bad rap compared with most other groups. In 2017, Pew asked people to rate their warmth toward various religious groups on a scale of zero to 100. The results placed atheists at 50, making them the least-liked group other than Muslims, who came in at 48. (For comparison, Jews were the most-liked group, with a rating of 67 on the 100-point scale.) One 2015 study found that in people's minds, atheism is linked with thoughts of death, perhaps because of atheists' implied lack of belief in the afterlife.

It might seem natural that religious people would resent atheists, but atheists should feel good about themselves … right? That wasn't the case, according to the new study.

The researchers didn't ask people directly for their views on atheists, because they were interested in more subtle, almost unconscious, attitudes. So they took advantage of something called the "conjunction fallacy." This is the tendency of the mind to think that specific situations are more likely than general ones. In this case, 3,256 study participants from 13 different countries read a description of a man who tortured animals as a child and then became more and more violent in adulthood, eventually murdering five homeless people.

Logically, "a teacher" is always the correct answer, because it's the less specific choice and thus more likely to be applicable. But people tend to make snap judgments, such that when the additional information meshes with their biases, they pick the more specific choice.

The specific choice that resonated with a description of a serial killer turned out to be "nonbeliever." Overall, people were nearly twice as likely to make the error of choosing the more specific option when that option described an atheist. Fifty-eight percent of the people who chose either a "teacher" or a "teacher and nonbeliever" said the serial killer was a nonbeliever teacher, compared with only 30 percent who chose "teacher and believer" instead of "teacher" alone. [Infographic: The World's Top Religions]

Most surprisingly, there was little difference in this error rate when the researchers looked at only the answers from the people who said they, themselves, were nonbelievers. About 52 percent of nonbelievers made the error of calling the serial-killing teacher a nonbeliever, compared with 28 percent who made the error of calling the killer a believer. Even absolute atheists, who rated their belief in a deity at zero, still made the conjunction fallacy more often when the choice was "nonbeliever teacher" (61 percent of the time) than when it was "believer teacher" (50 percent of the time).

The researchers repeated the study with different scenarios (such as skipping out on a dinner check) and even with crimes people might associate with religion. In the case of child molestation, for example, people were still more likely to think that the perpetrator was a priest who didn't believe in God than a priest who did believe in God.

"Participants intuitively assume that the perpetrators of immoral acts are probably atheists," the researchers wrote. "These effects appeared across religiously diverse societies, including countries with Buddhist, Christian, Hindu, Muslim and nonreligious majorities."