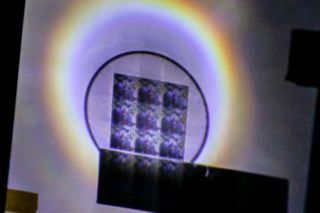 University of Utah electrical and computer engineering associate professor Rajesh Menon shows off a new 2D hologram that can be displayed with just a flashlight. His team has discovered a way to create inexpensive full-color 2D and 3D holograms that are far more realistic, brighter, and can be viewed at wider angles than current holograms.
(Image: © Dan Hixson/University of Utah College of Engineering)

Holograms have long captured the public's imagination. Whether it's Star Wars fans dreaming of holographic messages and chess games, concertgoers standing in awe before a resurrected Tupac Shakur, or the holographic future envisioned in the upcoming Blade Runner 2049, the hologram concept seems to offer something for everyone.

But despite the development of modern, laser-based hologram technology since the 1960s, the only holograms most of us encounter today are the blurry security images on our credit cards or the occasional dimly lit display in a science museum.

Now a team of engineers from the University of Utah claims to have developed a game-changing technology that can cheaply create photorealistic 3D holograms that are viewable with nothing more than a flashlight. In a paper published in Scientific Reports, the researchers explain how they used complex 3D nanostructures to produce holograms with the kind of rich colors and bright display that may one day make sophisticated holograms an everyday reality.

To understand how today's hologram technology works, it's helpful to compare it to regular photographs. A photographic camera uses lenses and a natural light source to record the light emitted from a scene on a photographic medium. The result is a 2D image that faithfully matches the original scene from a specific angle or vantage.

A hologram, however, is a recording of the full light field produced by an object in three dimensions. To capture that scattered light field requires a powerful light source like a laser, which is split and directed by mirrors to strike the object from all sides.

Ordinary holograms record the light field on a chemical medium similar to photographic paper, which to the naked eye looks like nothing more than a random collection of dots and lines. To actually produce the holographic image, you need to shine another laser light on or through the recorded hologram. The resulting ghost-like, floating image can then be viewed from many angles.

Conventional hologram technology has some serious limitations, according to Rajesh Menon, associate professor of electrical and computer engineering at the University of Utah and lead author of the new paper. First, the holograms produced by these laser-based systems are very dim and only clearly visible in dark rooms. Second, if you want a hologram with many colors, you need to use lasers in each color, which quickly gets expensive. Then there are issues with the mass-produced sticker-style holograms used for security, which are distorted by a rainbow shimmering effect.

The new process developed by Menon and his team appears to solve all of these issues while greatly reducing the production and display costs. The magic is in the holographic recordings, which are transparent sheets of plastic embossed with a 3D nanostructure of microscopic hills and valleys. Instead of absorbing white light and only reflecting back certain wavelengths, the nanoscale topography of the hologram is engineered to manipulate and tune light so that it produces a bright, full-color 3D image from the simple beam of a flashlight.

The technology is similar to an evolutionary adaptation exhibited in certain butterfly species. Color in nature is usually a product of pigments that absorb certain wavelengths of light and reflect others. But these butterflies boost the brilliance of their iridescent wings by bouncing light across microscales instead of absorbing it. As some wavelengths are canceled out through interference, a brilliant pure blue is reflected back to the viewer.

Menon explained that his computer-generated microstructures serve a similar purpose, increasing the efficiency and brightness of the hologram by redirecting light rather than absorbing it.

Since the 3D nanostructures can be stamped onto normal plastic, the holograms will be relatively affordable to reproduce, similar to the mass-production of CDs or DVDs. That could help Menon's holograms compete in the security market. Instead of the rainbow-streaked stickers on credit cards and driver's licenses, we could soon have photorealistic holograms that are much more difficult to forge.

While the paper only describes the production of 2D holograms, Menon says that his team has also successfully made static 3D holograms using the same technology. But he hasn't taken his sight off the ultimate goal, which is a full-motion interactive hologram straight out of sci-fi. He said that this initial research points to a path forward, but that many engineering challenges remain.

"To create dynamic images, you need to be able to change the pattern that you're imprinting as a function of time," Menon said. "There are technologies that we can borrow upon to do this, but they need some improvement."